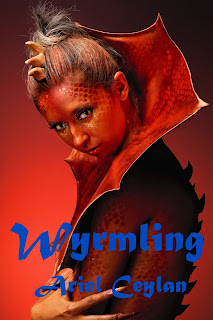 Dragons aren't real, or at least that's what Yukio thought until she met one who placed an enchanted bracelet on her that could only be removed in another world, Kineta. The dragon dropped Yukio off outside the gates of Lumene, a city of smiles and lies. She is forced to lie about her identity since no one believes her when she says she's never heard of Kineta. During her stay in the city, she finds herself learning secrets about the Prince of Lumene who is trying to reclaim his throne from the usurper, the Leader of the Lumenian Faction. The usurper so happens to be the only person in the city Yukio feels comfortable with to tell the truth and maybe even love. She is told that her arrival marks the return of the Esau, the great beasts of Lumene that were banished in the empire. Everyone expects her to do something great. How does skin turning into scales sound? Yukio is changing into something she's not sure of what she will become. She needs to take the bracelet off, but if she slips into the middle of the night, will she start a war within the city walls?


Adult-content rating: This book contains content considered unsuitable for young readers 17 and under, and which may be offensive to some readers of all ages

I received this book in exchange for an honest review.  But I HONESTLY couldn't finish reading this extremely strange book.  I very rarely put a book in my DNF shelf.  I believe this is really the first one. ( I always try to finish a book)   I made it to page 45, and I had to give up.
This is supposed to be fantasy, so I know things could be weird, but this was beyond weird to the point of stupid.  The writing style was bad as well.
Yukio is a college student looking for her dad, but throughout the parts I read when I author would talk about Yukio doing something she would say  "the college student did this" or "the college student did that".
I do like description on things in my books, but this author went overboard in describing things.  She describes Yukio's roommate, who at this point was only really seen for like 5 seconds so it was pointless.
Okay, I will stop rambling about how bad it was.
Posted by Alisa Jenkins at 1:29 PM