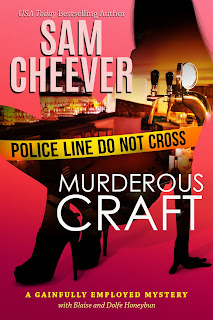 BLURB:
Dead End Job: When the only thing on tap is death.

A corpse discovered in a popular bar. An old acquaintance still nursing a mad-on from fifteen years earlier. And a cast of characters possessing secrets they’ll do almost anything to keep. It’s enough to make reformed (sort of) party girl Blaise Runa want to quit her dead end job. But in the meantime she fully intends to grab her sexy private eye fiancé and dig into the mess. Because she might be trying to adult, but that doesn’t mean she’s gotten any less nosy!
BUY LINKS:
Amazon.com: http://amzn.to/2vcBMrv
Kobo: https://www.kobo.com/us/en/ebook/murderous-craft
iBooks: https://itunes.apple.com/us/book/murderous-craft/id1261348392
Paperback: http://samcheever.com/blog/murderouscraftpaper
Barnes & Noble: https://www.barnesandnoble.com/w/murderous-craft-sam-cheever/1126651026
GooglePlay: https://play.google.com/store/books/details/Sam_Cheever_Murderous_Craft?id=1bopDwAAQBAJ 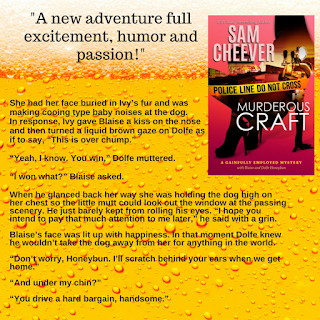 The darkening of the sky beyond the opening was all the impetus Blaise needed to stop feeling sorry for herself. If she didn’t get out of that well before it got dark she’d be working in pitch black conditions. She didn’t fool herself into thinking a fat, silver moon was going to cast light down the well to guide her way.
Her best shot was to get out of there while she could still see.
She shoved herself back onto the ledge and extended her legs again, pointing her toes until they reached the other side. Pressing against the wall, Blaise realized her toes were never going to hold all the way up. She arched her back and managed to flatten her feet against the wall. Happy she was wearing sneakers instead of her usual heels, Blaise took a deep breath and shoved against the wall with her shoulder blades, walking her feet up a few inches. Then she pressed her sneakers against the wall and, using her hands to help, shimmied upward a few inches.
Her back and calves started screaming after only going only a couple of yards.
By the time she’d gone half a dozen feet she was in tears. But by the time she was an arm’s length from the top the pain had become almost white noise in the larger problem waiting for her above.
As she’d neared the top of the well, she’d become increasingly aware of a crackling noise and the sharp scent of burning wood. The air above the well was dense with a gray haze she realized was smoke. But it wasn’t until the terrified shrieking started that Blaise realized what she was up against.
Somebody was trapped in the fire she could smell and hear.
Beneath the strident threads of pure terror in the chilling screams was a familiar note. Blaise recognized the voice. And it made her clumsy with renewed fear. Her feet slipped and, before she could stop herself she’d slid downward almost eighteen inches.
Blaise screamed in frustration and dug in again, determined to get out of that well to save Suz. 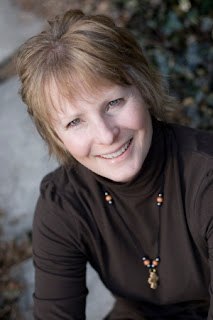 USA Today Bestselling Author Sam Cheever writes romantic paranormal/fantasy and mystery/suspense, creating stories that celebrate the joy of love in all its forms. Known for writing great characters, snappy dialogue, and unique and exhilarating stories, Sam is the award-winning author of 50+ books and has been writing for over a decade under several noms de plume.

If you haven't already connected, Sam would love it if you Liked/Followed her wherever you enjoy hanging out online. Here are her online haunts:
Newsletter: http://www.samcheever.com/newsletter.html Subscribe to Sam’s newsletter and win a free copy of the fun and sexy Honeybun Fever Box Set
Text News Alerts: https://mobile-text-alerts.com/samnews
Website: http://www.SamCheever.com
Sam’s Store for Discounted Prices: https://samcheever.selz.com
Blog: http://samcheever.com/blog/

http://lovekissedpromotions.com/index.php/blogger-sign-ups/
Posted by Unknown at 3:29 AM