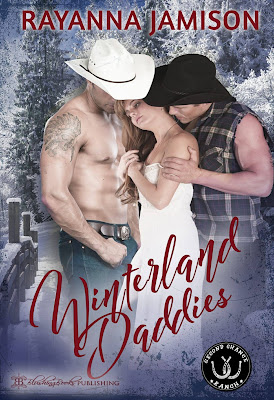 My Daddy. My Dom. I loved them both.

My Daddy. My Dom. Each held a special place in my heart, but they hadn't known about each other. Until that day.
Unable to choose between them, I ran away, intending to make a new life for myself, far away. Life doesn't always work out the way you plan—this year, they came back for me.
I still love them both, and they still love me, but one thing has changed. They have learned to share.
Publisher's Note: This book contains stern punishments and graphic sexual scenes, including menage scenes. If you find any of these offensive, this book is not for you. 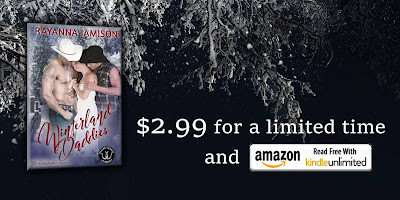 At six twenty-nine, I flung myself on the bed, propping myself on one elbow, and wearing what I hoped was a come hither gaze. At exactly six thirty, the door opened, and my body reacted instantly, as my two shirtless cowboys entered the room, wearing nothing but sexy smiles and worn out Levis. Hot damn. Any woman would consider herself lucky to have even one of them. How on earth had I gotten lucky enough to have both, and how long would it last?
They stood there, filling the entrance, their eyes roaming over my body. I tingled with self-consciousness, and every nerve on my body seemed to sizzle with electricity. My panties were nearly already soaked through with my own arousal, and they hadn’t even entered the room yet. If that was any hint as to how the rest of the night was going to go, I was a goner.
My face flamed as they stared at me and I willed them to make a move. Finally matching their gaze with my own, I pleaded silently with Slade to put me out of my misery. But it wasn’t Slade that made the first move. It was Blake.
Blake, who sauntered in slowly, his eyes never leaving mine as he made his way to the bed. Blake who stopped just shy of the edge of the bed, and wordlessly removed his jeans, revealing a sexy pair of Black boxer briefs, that truly left little to the imagination. It was Blake who climbed atop me on the bed, covering his body with mine, and his lips who claimed mine in a hot and passionate kiss, that left no question that though tonight was my reward, he was the one in charge

Writing has been a passion of mine since I was 9 years old, and I always dreamed of becoming an author, but life happens and sometimes that first step seems like a giant leap. I credit a life changing move from the Oregon to Utah in the fall of 2013 as the catalyst that began my writing career.
I now reside in Southern Utah with my husband, my two children, two dogs, my mother, my 90 year old grandfather and a lizard named Leo.
I write what I love to read, which is fun romantic stories about submission in its many forms, and often joke that my stories get slightly dirtier with each one I write. When I am not writing, I enjoy my passions, which include cooking, drinking good coffee and good wine, shopping for crazy knee socks, celebrating with sushi for every occasion, and most of all spending time with my friends and family.