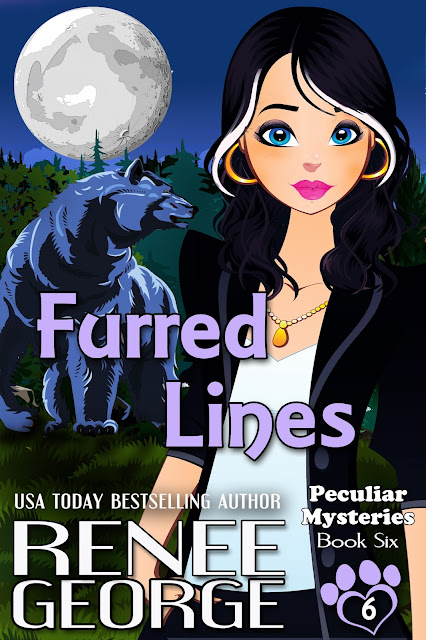 Blurb:
Wereraccoon Nicole Taylor, a recent Quantico graduate, is eager to prove herself. She's been assigned
to work with oh-so-yummy field agent and werebear Dominic Tartan to catch a therianthrope serial.

Dom doesn't know what to make of the sexy recruit he's been tasked to train. Half the time he wants
to ditch her, the other half of the time he wants to kiss her. Nicole struggles with the urge to sock him
one or jump his bones.

Doomsday preppers, a dead body, and a crate full of stolen guns make the case even more Peculiar.
Can Nicole and Dom find the killer in the chaos? Or will someone close to Nicole be the psycho's
next target? 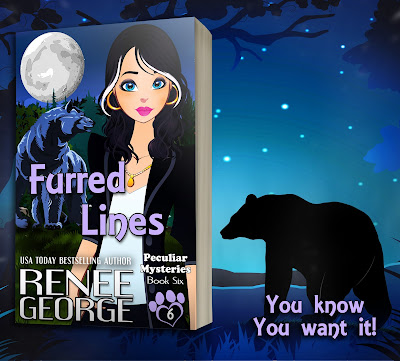 Excerpt:
“I’ll take the open-faced roast beef sandwich piled high with mash potatoes and extra brown gravy,”
a man behind me said. I whipped my head around hard enough to wrench my neck. Dominic Tartan
stood a few feet away. He raised his brow at my unasked question. “I finished up early in Springfield.
Thought I would join you for lunch.”
I’d texted him about my plans, but I didn’t think he’d track me down.
He turned his gaze to the table, and his expression brightened immensely when he saw Chavvah.
“Well, hello, Chav. Is it still Trimmel, or has the good doctor nailed you down yet?”
“He nails me every chance he gets,” she said as if she was commenting on the weather.
The slight uptick of the corner of her mouth and the way she reached up to move a lock of
hair from her shoulder told me she didn’t mind the flirting, but I’d seen her with Doctor Smith,
and if Tartan thought he had a chance in hell with the tall, leggy brunette, he was sorely mistaken.
“So not married.” Dominic smiled.
“We’ve set a date,” she said.
“March twentieth,” Sunny said. “The Spring equinox or some such nonsense. Werewolves are a pain in the ass.”
“True story,” Chav said, “and they sure know how to ruin a perfectly good party.”
Dom spread his hands. “Well, if it’s a party you want…”
Selena, who had been waiting patiently for our orders, giggled.
I stood up. “There isn’t room at this table for another chair. Agent Tartan and I will take the one
Mr. And Mrs. Smart just left.”
Selena’s smile grew tight. “I’ll get it cleaned up for you two.” She looked at the deputy.
“Should I make it for three?”
I said, “yes,” while Dominic said, “no.”
Eldin shook his head. “You two go on. I’ll finish lunch with Sunny and Chav.”
After we sat at the new table, a small one near the kitchen, I sipped my coffee and glared at Dominic.
He ordered an iced tea then turned to me and said, “What?”
In a quiet shout, the kind that’s all about tone without volume, I said, “What top secret information
did you learn that Eldin couldn’t hear?”
“Other than what’s in the files, there’s nothing new to learn.”
“But the victim is definitely a therianthrope?”
“They’re rabbit shifters.”
“That explains the five kids and another on the way. Though, we have a woman in town, a
deer shifter, who would give those rabbits a run for their money.”
“You mean Ruth Thompson.”
I assessed him again. “I get you spent a week here a couple years back, but damn, you really
paid attention.”
“Ruth is a friend of Chav’s.”
A knot formed in my throat. “Just how well did you get to know Chavvah Trimmel?”
“As well as any man could with a jealous werewolf breathing down his neck.”
I snorted. “So not as well as you’d have liked.”
Dom winked at me, and the knot in my throat tightened.
“Do any of the victims have ties to Peculiar? I really don’t see how any investigation here is going
to produce a lead.”
“Actually, there is one thing that ties them all together.” He leaned forward. “They were all at the
Tri-State Council Jubilee here in two summers ago.”
“When did you find this out?” Because if it was sooner than the past four hours I was going to be
unhappy.
“I got the information when I was driving here from Springfield. You know Wilhelmina Boden,
your dad’s new deputy?”
“Oh, yeah, the red-head engaged to Brady Corman.”
Dom’s eyes darkened. “That’s her. She was head of security for the Tri-State Council before her
move to Peculiar. She managed to get her hands on a complete list of all the people who attended
the event. She gave your dad and me a copy.”
“Did you find out if there are any more killings in this same vein prior to the last three?”
He shook his head. “Not yet.” I noticed for the first time how tired he looked around the eyes.
“We should get to the interviews with the Blonde Bear owners and staff. Mr. Lieberman’s life may
depend on it. Though I don’t know what we can learn here. Strangers stick out like sore thumbs.
I think Blondina and Roger would have told my dad if anyone around here fit the bill.”
“That’s just it.” Dom rubbed his chin. “I think it’s someone who lives here.”
I nodded, not wanting to agree, but there was no other explanation. “We need to start a list of
people who could leave town without drawing suspicion.”
“Agreed,” Dom said. “And we need to do it in a way that doesn’t alert the unsub.”
In a town of less than two-thousand people, my partner was asking for a whole lot of impossible,
but there were other things to consider with this criminal.
“This guy is smart. Organized. So, let’s narrow it down by skilled employment or white-collar work.”
I planted my elbow on the table as another thought occurred to me. “This killer is real ballsy.
He takes his victims outside their homes and returns them. That takes a lot of confidence.”
I felt a hand on my shoulder and turned to see Sunny Haddock staring down at me. Her eyes were
glazed, and her very worried-looking best friend stood behind her.
“What is it?”
Chav shook her head. “I’ve never seen her like this.”
With a blank stare in my direction, Sunny said in a monotone voice, “Duck when you see the
yellow man. Step over the crack. Skipped stones on the lake. Beware the lying owl. Falling glass.
Death.” Her voice grew even more hollow. “Death strikes at twelve.” She blinked, her pupils
flexing to focus. “What in the world? That’s weird.”
I let out a noisy breath I’d been holding. “You’re not kidding.”
*****
Get it now! http://www.peculiarmysteries.com
About me: 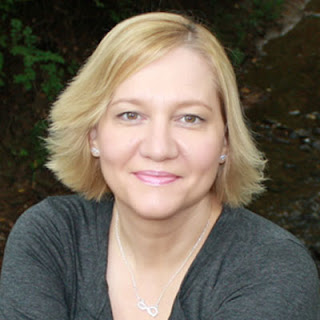 I am a USA Today Bestselling author who writes paranormal mysteries and romances because I love all
things whodunit, Otherworldly, and weird. Also, I wish my pittie, the adorable Kona Princess Warrior, and
my beagle, Josie the Incontinent Princess, could talk. Or at least be more like Scooby-Doo and help me
unmask villains at the haunted house up the street.

When I'm not writing about mystery-solving werecougars or the adventures of a hapless psychic living among
shapeshifters, I am preyed upon by stray kittens who end up living in my house because I can't say no to
those sweet, furry faces. (Someone stop giving them directions to my house!)