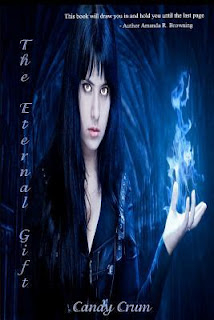 The Eternal Gift by Candy Crum

A young girl (Kailah) discovers that she is from a lost and forgotten powerful Immortal blood line after she meets a strange new physician at work. She begins to have visions and see spirits and has trouble controlling bad things from happening when she is angry. Along the way she discovers the terrible truth about who she is and the incredible power that is locked away deep inside her. Her Immortal ancestors want to use her to destroy the vampire race. Vampires want to use her power to destroy her Immortal ancestors. But hiding in the shadows are those who have been watching her since she was born. They want to help Kailah discover who she is and help her learn to use her abilities. They simply want for her to make the right decision before it's too late. Unfortunately for them time is not on their side and the Rogue Vampires have plans for Kailah no one could have imagined

This book was very well written, definitely had me hooked.
All the characters were "believable" and they got along superb.
As Kailah is learning her powers, she is taken into the home of Aeric, Brett and Khanae who are Vampires. Kailah is an immortal, her bloodline is to hate all vampires. But she learns to trust them and she learns from them how to use her powers, as they are there to protect her from her Great, Great, Great-grandmother Khia. Also siding with the vampires is Kailah's Great great grandmother Sayden.
Kailah has always had visions, and seen ghost. Now she is able to talk to the ghost and use their spirits to boost her powers.
As she is with Aeric she falls for him and he for her. But he tells her he can never be with her. He is always there to save her, as there are many times her life becomes in danger. The rogue vampires want her, to turn her into one of them for the power, vampires want her on their side to over balance the war and of course Khia wants her so they can rid the world of ALL vampires.
I love the banter between Kailah and Aeric! I can't wait to get ahold of the rest of this series!