Honor of a Scottish Warrior by Sky Purington Tour & Giveaway 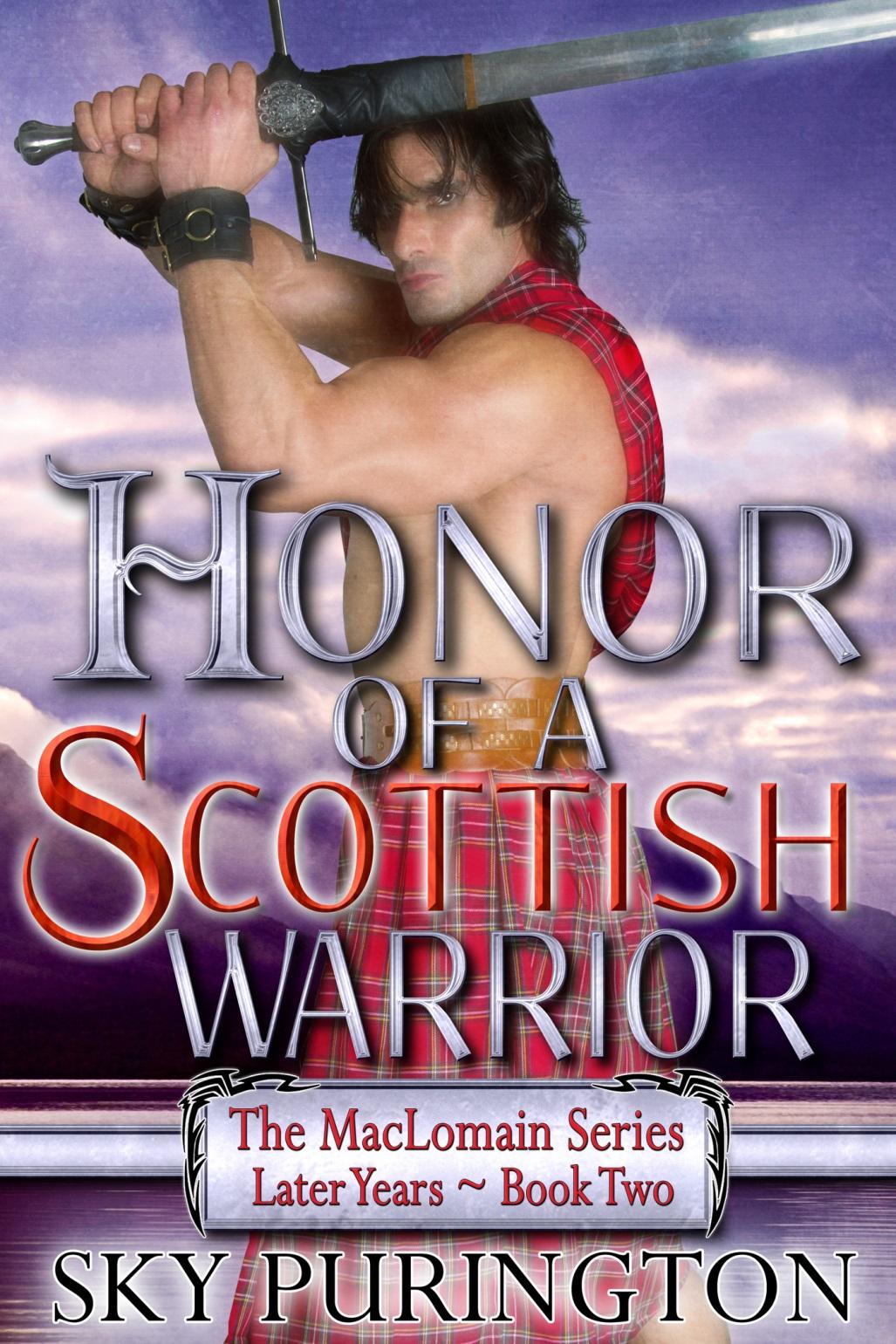 Born and raised in South Boston, Nicole is tougher than most. Fearless some might say. Even in light of the fact she might be going deaf. Then her courage is put to the test when her Broun lineage introduces a whole new reality. Time travel exists. An evil enemy awaits her in medieval Scotland. And the newfound Claddagh ring on her finger? It means she has no choice but to travel back to the thirteenth century. Straight into the arms and under the protection of a man she would rather never see again.

Cousin to the Laird, Niall MacLomain wants nothing more than to keep safe the future King of Scotland. Regrettably, that also means keeping safe a headstrong lass from the future. But his honor means everything. No matter how exasperated, he swore that no harm would come to Nicole. However, protecting the feisty redhead ends up stirring his blood in more ways than one.

When Niall and Nicole come together, sparks fly. Excitement. Strife. Desire. But not love. Never that. Determined to work as a team to keep little Robert the Bruce safe, they embark on a non-stop adventure. With help from the MacLomain’s Viking ancestors, they might just stand a chance against Brae Stewart and her villainous partner. More than that, they could very well discover that they fare far better together than they ever did apart.

She spun fast and low, remaining on the balls of her feet as she thrust at his side. But he moved faster and before she could shift away, he swiped her legs out from beneath her. She ignored the air being knocked out of her lungs and rolled. When he grabbed her ankle, she turned sideways and kicked but not before she slid a dagger out of her boot.
He blocked her foot then dragged her backward, belly down, so quickly she was caught off guard. In a flash, he was on her with both wrists pinned above her head. He squeezed her wrist so tightly she dropped the blade. For all she thought she was getting the hang of anticipating her opponent’s moves, she had a long way to go.
“Hell,” she mumbled, cheek against the dirt as she panted. Though disappointed in herself, she was all too aware of the feel of him. While he kept most of his weight off of her, he covered her enough that she wasn’t going anywhere.
Unless…
There was one weapon she had yet to use. Acting as though she was trying to escape, she pressed her backside up and wiggled it a bit as though struggling.
His breathing switched and his lips came close to her ear. “I know what you’re trying to do, lass.”
“And I’d say it’s working,” she murmured, not letting up with her wiggling.
The only problem? Her plan was backfiring. While she might be arousing him, a dull ache had blossomed between her thighs. Damn it. She seriously didn’t want to be turned on by this guy. Yet her heart was hammering and the ache was increasing.
“Ye best be careful about this method when a man has ye pinned.” His brogue had thickened right along with something else. “Now how do ye intend to get out of this without being taken against yer will?”
His hot breath fanned down her neck and a shiver rippled through her. “You might be a lot of things, Brute, but a rapist isn’t one of them.”
“It doesnae matter.” He ground against her and she almost groaned. “What matters is the next lad that catches ye in this position. So what is yer next move, Nicole?”
“So no more of the nickname, Ungrateful?”
“Not right now.” He pressed down again and the ache became throbs. “Not when I’m feeling verra grateful with the way yer moving yer arse.”
“I can tell,” she murmured, trying to buy time while she came up with a plan. About the only thing her body wanted to do was not fight but welcome him. Not good. “Stop that.”
“Stop what?” he said innocently, his voice a deep rumble against her back as he nibbled at the tender area beneath her ear.
“You’re not fighting fair,” she accused, trying to think clearly.
“Battling is never about being fair,” he said softly and she swore the nibbles turned to soft kisses. “’Tis about winning, dying.” His teeth gently clenched her earlobe before he pressed his hips down again and whispered, “Or surrendering.”
“There’ll be no surrendering to you,” she said. Or at least tried. Nothing really came out but a few gasps and a low, unstoppable moan.
“Show me how ye intend to get away.” His lips were close to hers. Too close. “Or are ye defeated already?”
Defeated? Heck no. She didn’t speak that language. So she cleared her mind and acted fast.
She turned her head as far as she could manage and brushed her lips against his. As she had hoped, he jolted and she flipped. Don’t think, just do, she preached to herself. Grabbing the back of his head with one hand she pulled his lips down to hers.
Don’t think, just do.
But it was damn difficult as she became far too aware of how perfectly their mouths fit together. How warm, soft yet hard and demanding his kiss suddenly turned.
He kissed differently than other guys. Skilled in a whole new way. He varied the pressure of his lips. Gentle and seeking yet confident and persistent.
Don’t think, just do.
All she could think about were his lips and how tempting it would be to open her mouth and let him in. What was it she was supposed to do again?
Win. You’re supposed to win.
Right. Now or never, Nicole. So she grabbed a dagger from the pouch attached to his back and held it to the side of his neck.
Niall stilled. His lusty eyes met hers.
“Gotcha,” she whispered, struggling for breath.
“Aye, lass. You got me,” he whispered back before he wrapped his hand into her hair and closed his lips over hers again.

Sky Purington is the best-selling author of eighteen novels and several novellas. A New Englander born and bred, Sky was raised hearing stories of folklore, myth and legend. When combined with a love for nature, romance and time-travel, elements from the stories of her youth found release in her books.

Purington loves to hear from readers and can be contacted at Sky@SkyPurington.com. Interested in keeping up with Sky's latest news and releases? Visit Sky's website, http://www.skypurington.com to download her free App on iTunes and Android or sign up for her quarterly newsletter. Love social networking? Find Sky on Facebook and Twitter.

2 winners to receive a $25 gift card to their choice of Amazon or Barnes & Noble.