Beauty of the Beast by Rachel L. Demeter Tour & Giveaway 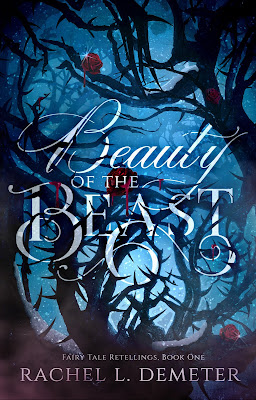 🥀 Book Blurb 🥀
Experience the world’s most enchanting and timeless love story—retold with a dark and realistic twist. A BEAST LIVING IN THE SHADOW OF HIS PAST Reclusive and severely scarred Prince Adam Delacroix has remained hidden inside a secluded, decrepit castle ever since he witnessed his family’s brutal massacre. Cloaked in shadow, with only the lamentations of past ghosts for company, he has abandoned all hope, allowing the world to believe he died on that tragic eve twenty-five years ago. A BEAUTY IN PURSUIT OF A BETTER FUTURE Caught in a fierce snowstorm, beautiful and strong-willed Isabelle Rose seeks shelter at a castle—unaware that its beastly and disfigured master is much more than he appears to be. When he imprisons her gravely ill and blind father, she bravely offers herself in his place. BEAUTY AND THE BEAST Stripped of his emotional defenses, Adam’s humanity reawakens as he encounters a kindred soul in Isabelle. Together they will wade through darkness and discover beauty and passion in the most unlikely of places. But when a monster from Isabelle’s former life threatens their new love, Demrov’s forgotten prince must emerge from his shadows and face the world once more… Perfect for fans of Beauty and the Beast and The Phantom of the Opera, Beauty of the Beast brings a familiar and well-loved fairy tale to life with a rich setting in the kingdom of Demrov and a captivating, Gothic voice. Beauty of the Beast is the first standalone installment in a series of classic fairy tales reimagined with a dark and realistic twist. Disclaimer: This is an edgy retelling of the classic fairy tale. Due to strong sexual content, profanity, and dark subject matter, including an instance of sexual assault committed by the villain, Beauty of the Beast is not intended for readers under the age of 18. 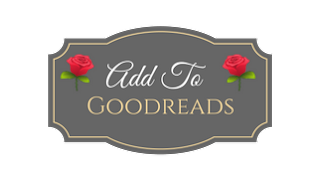 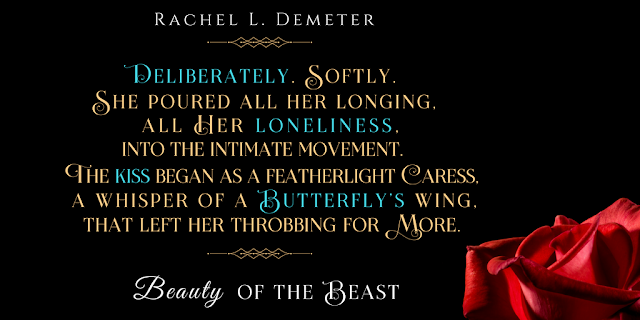 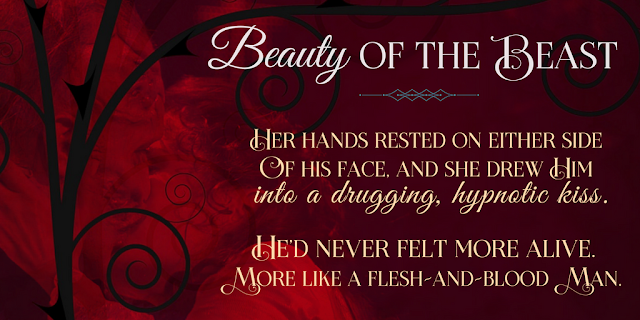 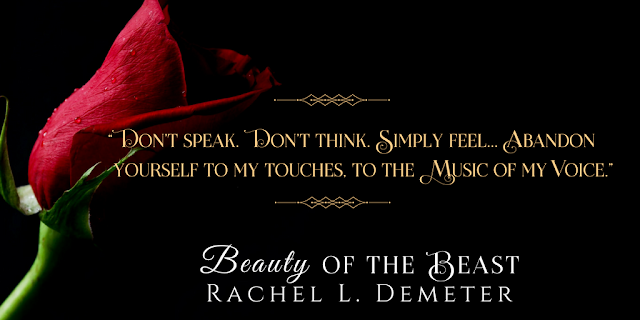 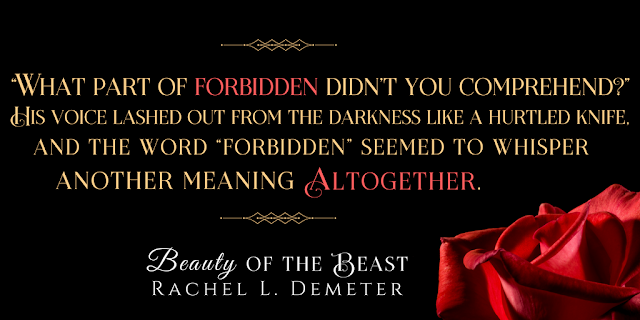 Isabelle entered the ballroom at precisely eight o’clock. Moonlight, bone white and lustrous, threaded through the grand windows like prying fingers. The illumination set the medallion flooring aglow. Columns lined the oval-shaped room and graced a domed ceiling. A handsome grandfather clock towered in the corner, ticking off the seconds with a pulsating drone. Candelabras reached around the edge of the circular room and lurked like quiet sentries. Their wavering candles mated with the moonbeams and threw golden patches across the intricate marble floor.

Incredible silence surrounded Isabelle, pressed into her very being, as she slipped into the heart of the ballroom. She could almost hear the gay whispers of ladies and the delicate swishing of their lace fans. She smelled the sweet scents of their exotic perfumes and could hear the distant, ghostly echo of a pianoforte. And she knew that, despite the castle’s neglected state, it had once been a place of unrivaled beauty and glamour.

Isabelle spun around full circle, her mind transporting to a past era that brimmed with elegance and luxury. She felt the darkly romantic pull of the castle and its numberless mysteries... felt herself falling in love with its shadows and secrets. Dust motes danced in the shafts of moonbeams and wavering candles. Faintly she hummed beneath her breath, testing the acoustics in the spacious room. Her voice carried, swirling around her in an echoing cyclone.

Then she came to a standstill as a soft touch grazed her bare shoulder. Large, silk-clad hands rotated her body with a startling gentleness. A breath escaped her lips as she drank in Adam’s proud, towering form. Her mind slipped back to the previous day and night—to their sensual kiss in the stables.

A navy, double-breasted coat hugged the muscular curves of his body, offset by shimmering golden buttons. They looked like small glowing suns floating against a sky of rustic blue.

He resembled a flesh-and-blood prince. Proud. Formidable. In full command of everything and everyone in the room. Even a hint arrogant. Her heart hammered, threatening to burst. Suddenly she felt like she’d been thrust into a world of magic and romantic hushed secrets. The scars look out of place on his smirking features, she mused with a pang of sadness. And dressed in a cascade of cornflower damask and lace, the sparkling tiara half-buried in her curls, she felt like a princess.

Adam took a deft step backward, sank into a shallow bow, and outstretched his gloved hand. Isabelle grasped her flowing skirts and dipped into a curtsy, her heart madly pitter-pattering. Feeling like a young girl during her first ball, she accepted the invitation and abandoned her silk-encased palm in his own. Strength surged through his fingers, sending chords of awareness thrumming through her body.

Am I dreaming? If so, then let me sleep forever.

A muscled arm snaked around her torso and tugged her intimately close. Everything seemed to fade away while the heat of their bodies mingled as one. Her heart banged against her ribs as she sought the depths of his eyes. At this range, flicks of gold contrasted against his sky-blue irises. Much of the sadness seemed to have vanished, leaving an almost boyish delight in its wake. The right side of his face was devastatingly handsome, his hair so black it drank the twinkling candles.

Keeping her body pressed to his own, he swung her into the scandalous waltz dance. Her small fingers curled around his bicep as he lifted the other hand in midair. He swept her across the smooth marble floor, twirling her body, his large hand securely on the center of her back, his footwork extravagant and exact. Cords of muscle bunched and slid beneath her fingers, and light from the candelabras flashed over the mismatched sides of his face.

Isabelle felt clumsy—as if she had sprouted two left feet. She’d spent her youth traveling the countryside and coastline with Papa—not blushing behind a lace fan or dancing in lavish ballrooms. Adam, however, danced with a haunting grace; his movements executed with a fine, cultured polish. He clearly hadn’t been raised in the back of a wagon, she mused. Prince-like and regal, he’d danced this dance many times before; maybe it had been in another place and another life, but his confident, masterful steps gave the truth away.

Isabelle struggled to keep up with his graceful strides, though she knew she was making a fool of herself. She stumbled as Adam swept her into an unexpected twirl again; he reeled her back to his side, so they stood intimately close, then chuckled in her ear with the audacity of a pirate. The decadent sound rippled through her veins and mingled with the wine. His lips pressed against the shell of her ear, and the whisper of his warm breaths sent chills thrumming down her backbone.

I am falling for him—falling fast and hard.

Indeed. She’d been falling for him for some time.

“You’re a dreadful dancer,” he murmured against her ear. Paired with the husky baritone of his voice, the insult sounded rather like an endearment.

Regardless, she returned the blight with a swift and playful vengeance. “Perhaps my partner is to blame.” She cocked her head back and captured his bright gaze. He offered no retort aside from the arch in his thick brow.

Her face reached the height of his shoulder and not a centimeter more. She curled her head against the security of his chest and inhaled his essence with a reverent breath. A tangle of emotions welled in her gut, blurring everything but the moment... everything but the exquisite feel of Adam holding her. As he swept her across the smooth marble floor, the world whirled by in a beautiful, dreamlike mosaic.

She felt like she’d fallen into one of her fairy tales.

“Oh, Adam... I never want this moment to end,” she heard herself whisper against his coat.

Adam shifted back and forth in a tantalizing rocking motion, slow dancing to a melody only he could hear. As she melted into his embrace, the candelabras crackled and seductively flashed, accompanying each of their steps. Then he bowed his chin and hummed a beautiful tune against her forehead. It sounded achingly sweet, like a tender lullaby from the depths of a dream world. The force of his vocals resonated deep inside her, massaging Isabelle’s body with delicious caresses. Her heart resembled a drum—and she trembled in time with its beat. That immaculate baritone stoked her imagination, igniting an inferno deep within her soul.

Closing her eyes, she rubbed her cheek against his coat’s rugged material and sparkling buttons, abandoning herself to his rhythmic sways and husky baritone. Drawing her into its sultry, comforting depths, his voice surrounded her like liquid velvet. With increasing pressure, his palm swept up the length of her back, down and up, tickling her spine with each soothing movement. Heated breaths wafted against her hairline, stirring the curls about her shoulders. His every gesture felt numbingly gentle, executed with a startling grace. Isabelle had to remind herself to breathe, lest she faints from the pleasure of it all.

Emotion claimed the best of her. Isabelle exhaled a shaky breath as tears singed the corners of her eyes.

They danced like that for close to an hour, moving in perfect unison to the calming melody of Adam’s voice, the slick medallion floor sliding beneath their feet like some magical carpet. The marble ground reflected their waltzing images with the ease of a looking glass. 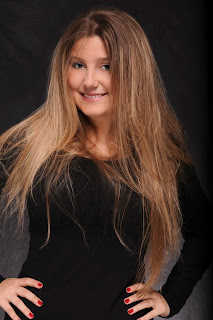 Rachel L. Demeter lives in the beautiful hills of Anaheim, California with Teddy, her goofy lowland sheepdog, and her high school sweetheart of fourteen years. She enjoys writing poignant romances that challenge the reader's emotions and explore the redeeming power of love. Imagining dynamic worlds and characters has been Rachel's passion for longer than she can remember. Before learning how to read or write, she would dictate stories while her mother would record them for her. She holds a special affinity for the tortured hero and unconventional romances. Whether crafting the protagonist or antagonist, she ensures every character is given a soul. Rachel endeavors to defy conventions by blending elements of romance, suspense, and horror. Some themes her stories never stray too far from: forbidden romance, soul mates, the power of love to redeem, mend all wounds, and triumph over darkness. Her dream is to move readers and leave an emotional impact through her words.
Website | Facebook | Twitter | Goodreads | Newsletter | Amazon | Instagram | Pinterest
Enter the Giveaway
Rachel L. Demeter is giving away an Ebook copy of Finding Gabriel directly to your Kindle 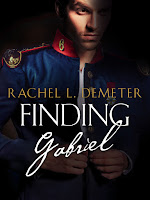 a Rafflecopter giveaway
Posted by Unknown at 4:16 AM