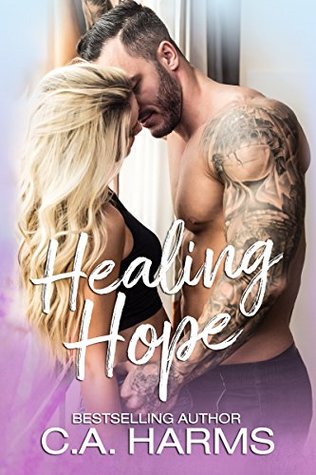 Hope Larsen is living each day of her life with a crippling guilt.
The game of ‘what if’ has made it almost impossible to move forward from such a
horrific event. In one life-changing moment, someone who meant so very much
to her was taken. A man who once was her best friend. A man she fell in love
with.

She wanted to love him freely even though he was gone and not feel so
immobilized by his absence. Relive the memories of times they shared without
feeling broken and lost.

Then he shows up.

He waltzes right into her life as if he belongs, strong confident and determined to
make her see him.

When Travis Donovan crosses paths with the snarky blonde, he’s intrigued. Her
dismissal of him and his antics doesn’t have the effect she’d hoped for. In fact,
it’s just the opposite. He’s not one to run scared from a challenge, but instead,
he's the type to fight even harder to conquer it.

Though she tries to fight her attraction for the cocky electrician, she finds that his
dedication fascinates her.
Hope comes to the realization that there’s one thing that scares her the most.
This man reminds her of the one she lost.
That stride, that smile, even the way he torments her…it’s all the same. He could
be the one to show her that it's okay to move forward. It’s okay to love again.

Travis Donovan just might be the one to heal Hope.

Hope has been through something that shattered her life. She withdrew from her friends, family, and life in general. How will she respond to the man who pushes all her buttons?

Travis is a great guy. He puts his family and employees first and thinks about himself last. What will happen when he crosses paths with a fiery blonde that he can't get off his mind?

I enjoyed this book, the relationship between Travis and Hope was genuine and full of heart.