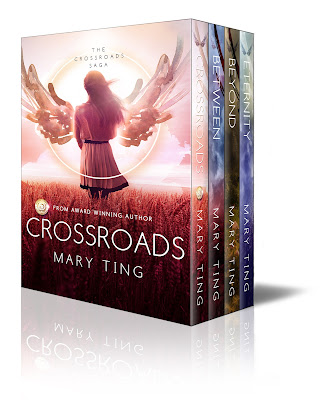 Blurb:
* * * READERS FAVORITE GOLD AWARD WINNER 2012--YOUNG ADULT * * *
***Based on a dream the author had in high school-chapter 1 & 2***
Protecting her from the fallen was his duty.
Falling in love was never part of his plan.
Loving her was forbidden.
Being with her was all that mattered, even if it meant he would be exiled for all eternity.
Claudia Emerson's life is about to change when her good friend, who coincidentally shares the same first and last name, dies in a tragic accident. Distraught at the loss of her friend, Claudia's dreams become tumultuous, and through them she mysteriously travels to another world called Crossroads. There, she unexpectedly meets Michael, a nephilim--half angel, half human. Now that she's been there, fallen and demons are after her, suspecting she must be special, and it is up to Michael and the other nephilim to protect her. Her dream becomes a nightmare as more secrets are revealed about who she really is, and the true identities of the people she loves most.

Mary Ting resides in Southern California with her husband and two children. She enjoys oil painting and making jewelry. Writing her first novel, Crossroads Saga, happened by chance. It was a way to grieve the death of her beloved grandmother, and inspired by a dream she once had as a young girl. When she started reading new adult novels, she fell in love with the genre. It was the reason she had to write one-Something Great. Why the pen name, M Clarke? She tours with Magic Johnson Foundation to promote literacy and her children’s chapter book-No Bullies Allowed.
Author Links:
Amazon: http://amzn.to/2hv4gWE
Goodreads: https://www.goodreads.com/author/show/4388953.Mary_Ting
Blog: http://www.marytingbooks.blogspot.com/
Twitter: https://twitter.com/maryting
Facebook: https://www.facebook.com/AuthorMaryTing
Buy Links: Amazon: http://amzn.to/2hDk6Sa