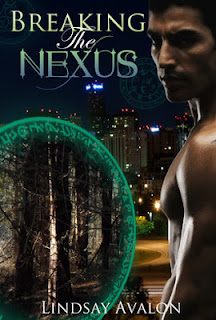 Throughout history, myths and legends of extraordinary creatures have been told and retold. Fantastic tales of demons and banshees, gryphons and dragons, and of course, magic. Stories that every child grows to learn are nothing more than fantasy…or are they?

Beyond the world you see lies a hidden realm, the Mythrian Realm, inhabited by all of the creatures you’ve been told are mere fiction. Only one thing lies between humans and the truth: the Nexus. A magical barrier erected millennia ago to separate the two realms, it has stood the test of time. Until now.

For Mythrian Sha Phoenix, magic is nothing new. But when she stumbles upon a portal on the verge of collapse, her fate will forever change. Pulled through the portal into the Human Realm, she lands in the middle of Detective Connor Flynn’s brutal murder scene. Soon it is obvious someone is using blood magic to try to bring down the Nexus. Together, Connor and Sha must work to unravel the secrets before the barrier falls and the realms collide.

The Nexus is breaking and all hell is about to unleash…literally.

4.5 stars
I was given this book by the author in exchange for an honest review.

And Let me be honest, at first I just wasn't into it. It took me longer to read the first couple chapters and get into the story that normal. But once I got reading and the story got going, I was hooked.
I loved the chemistry and attraction between Sha and Connor, very hot! Much better chemistry in this book than in the last erotica book I read!! lol
Sha is impulsive and Connor is usually by the books and this was working good for them in this story. Ian, Conner's partner on the Detective squad, also has a connection with Conner-that best-friend know what you're doing connection.
As all Hell breaks loose Sha and Connor fall in love, find clues to a series of murders and stop the world from ending.  Sha falls into the Human Realm from Mythrian right into the middle of a crime scene, in walks Detective Connor Flynn.  Instant attraction.  As the story unfolds, we see telepathy, banshees, a wendigo, and demons, not to mention the other fantasy creatures that  are mentioned in the book.For me as a reader, relatively new to Paranormal books, this was great. I think this series will be a big hit. And this new author did a great job
I can't gush over the book more without spilling things that happen in the book and ruin it for you.
But highly recommend for you to read.
Posted by Alisa Jenkins at 5:58 PM