Cover Reveal: Fighting for You by Megan Noelle and contest 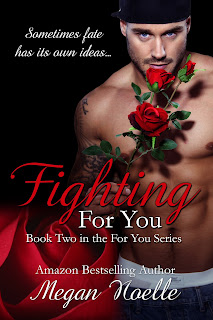 When love became too much for Danielle Hamilton, she did what she does best—she ran. Now, three months later Dani realized the mistake she made. A lot can change though, in a short amount of time and now there’s an unavoidable factor in her life that will change everything. Will Dani be able to save the only good she’s ever known? Can she fight for the love she wants—or is it just too little too late?

Corey has spent the last several months missing the only woman he’s ever wanted, but things aren’t about to get any easier. When demons from Corey’s past rise to the surface, he is put in the middle of something he thought was laid to rest. When drugs, money and an ex that wants to stir up trouble—returns to the picture—

Corey will be left fighting for his life. Will he be able to protect the only person he loves from a dangerous world she knows nothing about? Or will his past claim his life and inevitably…His heart.

Sometimes fate has its own ideas but will that be the end for Corey and Dani? Or will their fight for love prevail? 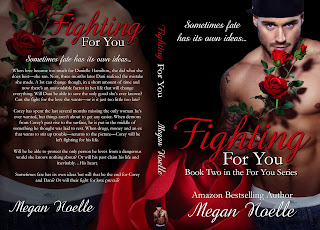 I am Megan Noelle and “Fighting For You” is my second novel that I will publish but not the first I’ve written.  I have been writing since I was old enough to hold a pen and finally pursued my dream of becoming a novelist.  Writing is my passion and I am all for following one’s passions! One of my other passions is being a mom of my adorable daughter Peyton.  She has just hit the terrible twos and boy…what a joy! When I’m not writing I’m a stay at home mom and a full time student in the typical major of “Undecided.” All I know is if I can write, be with my daughter and my family—I will be happy!
5 Random Things You Don’t Know About Me!
1. Peanut Butter M&Ms and a Diet Coke is my favorite treat—ever.
2. I would someday love to write a book that Tim Burton wants to make into a movie!
3. I have a ridiculous addiction to Bride shows.
4. I have a terrible habit of wanting to dye my hair—every month.
5. I can listen to the same song on repeat dozens of time in a row and still not be sick of it.