Victory isn’t your average seventeen year old girl. Her best friend is the only person in the world that knows her secret. She’s a vampire and is trying to come to terms with her own bloodlust she didn’t realize existed until she met Jason. Her mom wants her to learn who she is by sending her to a boarding school called Darkwood Manor. There she wrestles with her bloodlust and her unbinding attraction to Jason. Will she ever learn to control her blood lust?

I was given this ebook copy in exchange for an honest review.
I fell in love from the beginning!  This is a short YA story that draws you in right away.  I highly recommend this short to anyone who reads YA or paranormal.
Victoria, Jason and Nathan are characters that I would totally love in real life. I just adored the friend-love between Nathan and Victoria.  The steamy attraction between Victoria and Jason will keep you reading.
But beware: there is a Cliffhanger!!


Victoria Eden is just like every other girl at Darkwood Manor, except she has one very big secret. She’s a vampire, and she’s in love with a vampire hunter. When Victoria is attacked by a rogue werewolf, Jason saves her life and discovers her secret.
But Victoria isn’t the only one harboring a secret at Darkwood Manor. She soon discovers that she has a twin brother, one her mother failed to mention. Hunter comes into her life and turns her world upside down. Now she’s trying to save her relationship, avoid the hunters and keep her best friend from hating her for what she is. How could one little love bite change everything?

I was given this ebook in exchange for an honest review.
Again, I was in love.  This short starts exactly where book 1 left off and you are automatically drawn into the story.
This is another Short YA story, and great read for anyone.
In this book, we meet 2 new characters, and see more love from Jason and Victoria.  Victoria sees her dad in her dreams and meets her brother.  I liked how her brother, who she just met, fell right into Big Brother role.
I must say, I am hooked now on this series and I want more!


Khelsey hails from the Sunshine State (California) but moved to Minnesota when she was 11 years old. Her grandmother raised her and her brother. When she was 18 she did what any sane teen would do and moved to the city of sin, Las Vegas NV. There she met her handsome husband and the rest is history. She loves to read, and will read almost anything guess when you have read just about everything, the only next logical step is to write 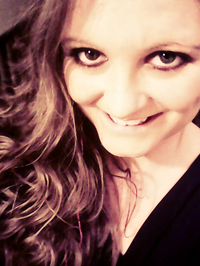 Posted by Alisa Jenkins at 2:53 PM