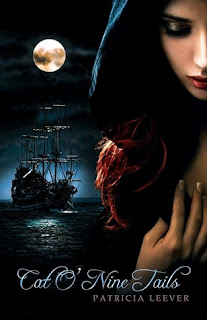 When Orrin and his brother Kale are hired by Queen Winifred to hunt down Aeron and her band of miscreants, Orrin never dreamed he’d fall in love with the beautiful she pirate, or the kind, accepting people of her island hideaway. As they grow closer, Aeron reveals her jaded past with Queen Winifred to Orrin; he doesn’t hesitate to offer his help to bring Winifred’s evil reign to an end. Aeron and Orrin soon discover that the strongest weapon in their combined arsenal is the love they have for each other.

“Is something the matter, my love?” he asked, lounging on her bed wearing the wickedest of smiles and absolutely nothing else.
Orrin’s delightfully naked body shimmered with a light sheen of perspiration in the candlelight as he lay on his side, propped up on his elbow. He tilted his head back as he lifted a slice of mango to his lips and proceeded to seductively tongue the delicate flesh and slowly suck it into his mouth. Aeron thought she was going to faint dead away. He licked the sticky juice off his lips as he picked up another slice of fruit and held it out to her in an offering, the sweet nectar spilling over his fingers and down his arm.
Harnessing every ounce of restraint she had, Aeron took her time crawling up onto the bed, slowly leaning forward and plucking the savory mango from his fingers. Looking deep into his cerulean blue eyes, she wrapped her fingers around his wrist and extended his arm out straight as she licked the sweet nectar from the crease of his elbow with a light brush of her tongue, up to the tip of his finger. She slid her free handdown his chest, tracing over the trails of course brown hair surrounding his nipples and spilling down his taut belly. Her finger dipped into his navel as she continued down, but he snatched her hand, rolling with her and trapping her beneath him.
He growled playfully, hovering over her and pinning her arms to the mattress over her head with an iron grip. “Not yet.”  He bent his head, grasping the ties of her shirt in his teeth and tugging the knots open.

Orrin Walsh is a pirate hunter turned outlaw when the lives of the Queen’s people are in danger from the Queen herself. He’s swashbuckling, sword wielding hotness from the top of his beautiful head to the tips of his black boots.

Voting starts September 30 ,2013
To vote for this book boyfriend, go to Love Between the Sheets, find this character, and place your vote: http://www.readlovelust.com/omnific-smackdown

(Giveaway may be extended)