Book Tour and Giveaway: The Guise Of A Gentleman by Donna Hatch 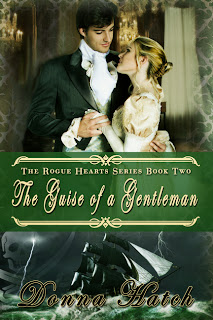 Title: The Guise Of A Gentleman

The widowed Elise is a perfect English lady living within the confines of society for the sake of her impressionable young son. Her quiet world is shattered when she meets the impulsive and scandalous Jared Amesbury. His roguish charm awakens her yearning for freedom and adventure. But his irrepressible grin and sea-green eyes hide a secret. A gentleman by day, a pirate by night, Jared accepts one last assignment before he can be truly free. Elise gives him hope that he, too, can find love and belonging. His hopes are crushed when his best laid plans go awry and Elise is dragged into his world of violence and deceit. She may not survive the revelation of Jared's past...or still love him when the truth is revealed.

Jared drew a breath. He needed to learn to trust sometime. He pulled at the cravat and decided which of his many secrets he’d need to reveal in order to complete his task.
“We have proof of a coalition of pirates,” he finally said. “There have been a shocking number of hits on the most heavily-laden merchant ships over the last four years. Someone is passing information from the shipping business to a leader of the pirate ring.”
Again, he felt Greymore’s eyes upon him. The unspoken question, ‘were you one of those pirate captains,’ hung in the air, but Jared volunteered nothing. Instead, he said, “After the war ended, privateers turned to outright piracy instead of returning to honest work. And someone is organizing a number of them.”
“A pirate coalition,” Greymore said thoughtfully. “A chilling thought. What do you know?”
“I’ve followed the trail here to a member of the gentry or the aristocracy.”
Greymore frowned. “What’s your plan?”
“Garner invitations to social events so I can meet people here. Then keep my mouth shut and listen. Maybe I’ll hear something interesting.”
“Hmm. I read somewhere that an unwed gentleman who has money must invariably be  looking for a wife. If word gets out that you’re wealthy, and unmarried, all the mamas will throw parties for you.”
Jared made a face and replied with great reluctance, “I suppose that’s one option.”
“You’ll meet the men because the ladies will have their husbands call upon you and invite you to hunt or have dinner and so forth in order to determine your suitability for their daughters. They’ll fall all over themselves to meet you.”
“Your flattery makes me blush,” Jared murmured with a wry grin that pulled at his sore lip. A picture of shallow, grasping women flashed into his mind, like sharks in a feeding frenzy. More of the same.
At least the women here wouldn’t be afraid of him.
At the thought of a social affair involving ladies, a sudden hope flared. The soirée might prove more useful than he originally thought. His angel’s genteel demeanor, cultured accent, and the cloth of her expertly tailored riding habit firmly proclaimed her a noblewoman. She’d no doubt be a member of the same elite social circle in which the local ladies traveled. And yet, the haughtiness he often encountered in peers and their kin remained absent in that lady. She’d attempted to emulate that attitude after he kissed her, but her anger and indignation only masked her true emotions. Emotions which clearly surprised and frightened her.

I've had a passion for writing since the age of 8 when I wrote her first short story. During my sophomore year in high school, I wrote her first full-length novel, a science fiction romance. I wrote my second novel during my senior year, a fantasy romance. Needless to say, English and Creative Writing were always my favorite subjects. Yes, I'm a total grammar geek! In between caring for six children, (7 counting my husband) I manage to carve out time to indulge in my writing obsession, with varying degrees of success, although I write most often late at night instead of sleeping. And yes, all of my heroes are patterned after my husband of 21 years, who continues to prove that there really is a happily ever after.

If you would like to offer the tour giveaway with your post, please use the below Rafflecopter code.
Giveaway is optional not mandatory