The Social Club by John Crusey 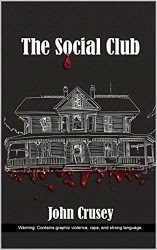 The Social Club
by John Crusey
Suspense/Thriller For adults only

It's said that a little knowledge can be dangerous. If that knowledge is about the Social Club it can be deadly. That's what 70-year-old, Mack McCormick learns when he stumbles onto the biggest story of his career as a newspaperman. Will he live to see it printed? The odds are against hi

“Yeah, that guy who was hit by the train the other morning – apparently it was no accident, the sheriff’s office is trying to figure if it was a suicide or murder.  And to top it off, somebody burned the guy’s house down last night.”
“Shit!” Will snorts and shakes his head, then remembers something else, and gets out of his chair, walking over to Mack,  “Hey, you want to see another local tragedy?” the young reporter asks, picking the newspaper up off of the table and opening it to page two, where the obituaries are always printed.  Handing the paper back, Will is pointing at the picture of a beautiful young woman.  “Look at this.”
Mack reads, “Betsy Fullenkamp, age 19 died at the home of her parents Saturday evening…”  “Nineteen?  Was she sick?” Mack asks.
“No, the police are definitely calling that one a suicide.  She hung herself.  Her mom found her in the basement swinging from the end of a clothesline.  The other end was tied around a sewer line.  Apparently she kicked a little stool out from under her.  They said her feet were less than six inches off the floor.”
“Damn.”
“I knew her,” Will says.  “They live less than a block from me.  Most beautiful woman I’ve ever seen, and a personality to match.  Bubbly and outgoing, she would have done anything for anybody.  Brains too, graduated at the top of her class last year, and was always on the dean’s list down at Miami, in Oxford.  So much going for her, and she throws it all away.  She had it all.”

Betsy doesn’t say another word getting out of the car.  When she closes the rear door, the men drive away, leaving her standing in the parking lot, alone.  I can’t tell anyone what happened.  Who would believe me?  Who can I even trust?  The judge, a lawyer, the sheriff’s men, they were all in on this. What do I do?

John Crusey lives in Piqua, Ohio with his wonderful wife, Kathy, and their two cats, Mama and Earl.  Totally disabled in 1998, John began searching for activities that he could still take part in.  Writing grabbed him and hasn't let go.  Because of writing, John now says that being disabled was one of the best things that ever happened to him.  It also gave him the opportunity to learn a great deal about himself.  He wrote a weekly column for a local newspaper for about two years, and has sold several magazine articles.  Chicken Soup for the Recovering Soul used one of John's stories as their lead.  In 2012, his first eBook, Ella, came out.  Ella is a fictionalized account of the life of one of John's close friends.  Everything that happens to Ella in the story is true, but names and geography are changed to keep her true identity hidden.  Through a long struggle, John has regained a lot of what he'd lost when he was disabled, and he enjoys riding his tadpole, recumbent trike on Piqua's beautiful bike path every chance he gets.
Posted by Alisa Jenkins at 3:00 AM