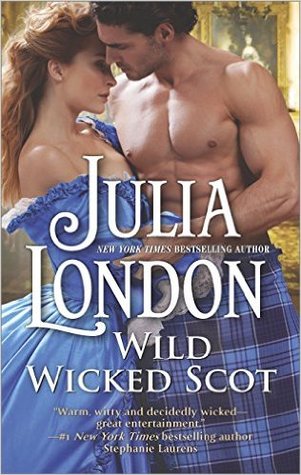 Born into riches and groomed in English luxury, Margot Armstrong didn't belong in a Scottish chieftain's devil-may-care world. Two years ago she fled their marriage of convenience and hasn't looked back--except to steal memories of moments spent in wild, rugged Arran McKenzie's embrace. But as their respective powerful kingdoms unite and political upheaval rings around them, she's forced to return to her husband in order to interrupt his secret plans to invade her country.

Red-haired, green-eyed Margot is a beautiful threat. The bride Arran lost has haunted him for ages. As the Highlands tremble with whispers of her people's plot to seize McKenzie territory, he must outmaneuver her in games of espionage...and seduction. Yet as their secrets entwine and their lands fall prey to a political war, there's nothing to prevent love from capturing them both and leading them straight to danger.

WOW! I loved this book without a doubt! I just couldn't get enough, however I had to take breaks cause you know- life.
This was awesome, I mean I just can't come up with words.
This is not a typical historical romance that follows the same outline. Yes, it has the arranged marriage, but that is really all from the traditional outline.
Here we have a runaway bride, after just 4 months of marriage, then she just shows back up. And wow, did she grow up. She was a completely different woman.
No kidnapping. But a sneaky little trick to throw someone in jail, then a jailbreak. Hell yeah!
I would say, that there are a few surprises in store for you. But just a lot of a husband and wife trying to find their way in a marriage