Alisa's Review: The Bear Who Loved Me by Kathy Lyons 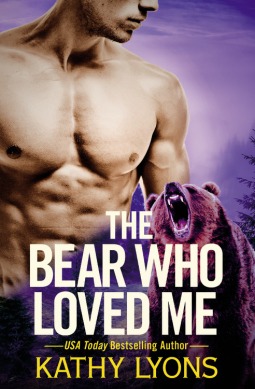 Between singlehandedly running her bakery and raising her teenaged nephew, Becca Weitz thought she had a decent grip on "normal." Then her nephew vanishes, and life as she's known it changes forever. Local legends are true: bear shifters exist . . . and her nephew is part of their clan. As is Carl Carman, the sexy, larger-than-life man who has sworn to find her nephew-and the other young shifters who've gone missing.

As the leader of his clan, Carl is surrounded by enemies. He's learned the hard way that keeping a firm leash on his inner beast is key to survival, though his feelings for Becca test his legendary control. Then danger stalks too close, and Carl realizes he must unleash the raging, primal force within to protect everything he holds dear. But can Becca trust his grizzly side with her life-and her heart?

I will give 4 stars, only because it could have been a great book. The story line was good, the writing itself was good. but I felt like it was "told" quite the way it could have been. I felt it was lacking in something.
There was lots of action (fighting), lots of suspense. With a romance thrown in. But was the romance just because of the turmoil that was going on in Becca's and Carl's life? read to find out.

I felt that the story took awhile to get going, there were some very interesting parts that kept me glued. Yet, there were many moments I just wanted to skip through the book.

*I received my copy from Netgalley in exchange for an honest review
Posted by Unknown at 6:31 AM