Blog Tour and Giveaway: Saved by the Rake by Em Taylor 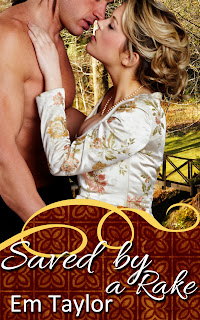 When Lady Rebecca Eversley is left ravished by the Earl of Newthorpe and facing ruination, she has the choice to point her pretty little nose in the air and face the gossips of the Ton or scurry off to the country to live out her life as an old maid. When she meets Lord Daniel Ramsey, a notorious rake, she decides on the former course of action.
Daniel has been given an ultimatum, marry before his father dies or lose the majority of his inheritance money. Rebecca seems the perfect candidate, especially once rumours about her start to circulate in the drawing rooms of Mayfair.
When Newthorpe is found dead on the morning of their wedding, the people they care about find themselves suspects in the case. Who murdered Newthorpe and can Rebecca ever get over what he did to her?

“Oh, Lord Ramsey. I am not sure a waltz is the most appropriate dance tonight.”
“The waltz is not to your taste, Lady Rebecca?”
“Oh I love to waltz. It’s just…” She blushed deeper and fumbled with her fan. He leaned close.
“As you know, the gossips like fresh news every day to discuss at their morning visits. I would suggest that we give them something other than the Earl of Newthorpe to discuss.”
Her eyes widened—then she smiled and accepted his arm to be led into their first waltz together.
He twirled her onto the floor before snaking his gloved hand around her waist. She stiffened, and he moved backwards instinctively. But she relaxed again as she raised her gaze to his, placing one hand on his shoulder and the other in his hand.
“All right?” he murmured. He considered faking a twisted ankle if it looked as if she was going to protest again. He had no doubt that, after her ordeal, she had no wish to be touched by a large, strong and virile man, even if half the Ton was watching her avidly.
The music started, and she nodded before taking a deep breath and allowing him to lead her around the floor.
He would have wished to dance slightly farther apart than was strictly necessary in order to give her the space she obviously desired but, as always was the case with the supper dance, the dance floor was busy. He gripped her waist tighter and pulled her close, turning her effortlessly, before waltzing them past the open French windows. He asked her about her home this time, in an effort to take her mind off their close contact and keep her at her ease. She had been uncomfortable when the waltz had been announced and he did not want her to feel any discomfiture in his presence. The girl had been through enough and he would make sure that, if nothing else, she enjoyed her two dances with him and her supper.
As she relaxed into telling him about Chapelbrooke, her back became less rigid and her movements more fluid.  He forced himself to concentrate on her words to distract himself from her ball gown brushing gently against his ankle every time he turned her.
He could have quite happily danced with her all night, listening to enchanting stories of her girlhood and gleaning small bits of information with which to tease Eversley for years to come.
After the dance, he led her into supper, ensuring that he sat her at a small table with her brother and his dance partner and another couple of his friends, whom he trusted, along with some pretty young ladies they had led into the waltz.
The company throughout dinner was excellent, and conversation flowed easily.  Daniel sat at one side of Lady Rebecca while James sat at the other. He was still unsure as to the extent of the gossip surrounding her and Newthorpe.
Had the accusation of her being a light skirt made it out of the gentlemen’s clubs? Of course, the reasons for the failure of their courtship would have raised a great deal of speculation among the ladies. He wanted to protect her if at all possible. For James’s sake, of course.
Daniel’s only regret now was that he could not solicit another dance with her, lest she be seen as fast. Suddenly he was looking forward to a visit to Chapelbrooke House the next morning—a feeling that discomfited him greatly. He was a single gentleman who enjoyed his life of gentlemanly pursuits—particularly those which included the bedding of the fairer sex. So why was he looking forward to seeing Rebecca again? Why could he not get those soft, pink lips out of his head?
Strong opening
In this time period, wouldn’t she wonder about the flip side? What would happen if she DOESN”T marry the man who’s ravaged her? Let us see this too.
Is it a coming out ball? I trust your research here.
Apparently it can be both.
I’m not sure this is the right term. Formations of the dance?
It is figures
Very good
Strong scene!
I think that protective instinct should rise again.
I think he needs to struggle with his lost freedom a little. Or question why he doesn’t seem to mind having given it up.

Lord Daniel Andrew Rutherford Ramsey, Viscount Ramsey and the heir to the Earldom of Drumbane in the south of Scotland. He was brought up like a typical English aristocrat – educated at Eton then Cambridge University. There he met his life-long friend, Lord James Eversley.
Until now, Daniel, now 34, has lived the life of a gentleman about town—visiting White’s Gentleman’s Club, riding in Hyde Park, fencing and boxing, and hiding in the card room during balls so none of the debutantes will trap him into a leg-shackle.
He enjoys the company of women, but since he’s not a total cad, he restricts his liaisons to young widows and courtesans—although he was not averse to the odd married woman in his younger days.
His mother died when he was nineteen. He has a brother and a sister and a father who believes he should be married to ensure the continuation of the family line. When he hears that James’ sister has been raped, he sees marriage to her as an answer to both their problems.

Lady Rebecca Eversley is the daughter of the Earl of Chapelbrooke. Like all aristocratic ladies, she had a governess and grew up mostly in the large country estate of her father, with the occasional trips to London. She plays the pianoforte, embroiders beautifully, sings and reads more than she ought. She is now 24 and had her come-out six years ago. She just has not yet found anyone she really wanted to marry.
But this year, she really must accept a suitable match. So when The Earl of Newthorpe begins to pay her attention, she agrees to be courted by him. It seems he will ask for her hand and though she is not particularly drawn to him, it is a good match. When he takes her to his home and dismisses her maid, she should have said no. There, in the countess’s bedchamber, he ravished her. Bruised, broken and most likely ruined, her only hop is a quick match before the Ton become aware of her predicament. Can her saviour really be Daniel, the rakish friend of her big brother?

Em was born and brought up in the Central Belt of Scotland and still lives there. She was told as a child she had an over active imagination—as if that is a bad thing. She’s traded her dreams of owning her own island, just like George in the Famous Five to hoping to meet her own Mr Darcy one day. But her imagination remains the same.
Unfortunately, Em was put off reading and writing by school and although she rediscovered her love of reading many years ago, she only tried her hand at writing again in 2011. After a year of writing fan fiction, she wrote an original short story for an anthology. This was followed up with two more shorts and 4 novella length books, all published under a pen name. Having fallen in love with a new sub-genre, courtesy of books by Mary Balogh and Lynsay Sands, she decided to try her hand at her new favourite genre for reading—regency.

Having bitten the bullet, she feels she has found her home in the 19th century, and it does give her an excuse to watch Colin Firth in a pair of buff breeches and riding books ad infinitum.

Please provide a copy of the book cover for the tour & for us to create a tour banner with. As well as an author photo. Also if you have photo teasers that you would like used leading up to the tour and during the tour please provide those.