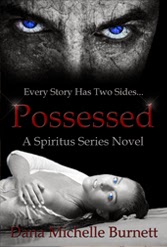 Every story has two sides...
Alastor truly believed that his life was over the night his wife Becca shot and killed him over a century ago, but now he has returned as a spirit to haunt the reincarnation of his traitorous, murdering wife. Why now? Why Becca after all this time?
When Becca moves into her ancestral home in Corydon, Indiana, her life takes a puzzling and thrilling turn when she meets the ghost haunting the halls. As the seductive spirit lures her closer and closer, she learns about her own past and starts to understand that some mistakes are meant to last.
To Becca, Alastor is a seductive spirit that seems to see straight into her soul. To Alastor, Becca is what he has waited a century for--A second chance. But a second chance at what? Love...Or revenge?
How far will each of them go to rectify the wrongs of the past?
Buy Links:
Amazon:
Barnes & Noble:
Kobo:
Smashwords:

Dana Michelle Burnett spent most of her life writing short stories and sharing them with family and friends. Over the years, her work was published in numerous commercial and literary magazines including Just Labs, Mindprints: A Literary Journal, Foliate Oak, and many more.  Her short story John Lennon and the Chicken Holocaust was include in The Best of Foliate Oak 2006.
Dana Michelle's Spiritus Series introduced the idea of a ghostly romance and became a Kindle bestselling series.  She's an avid reader of anything dark and romantic.  Dana Michelle lives in Southern Indiana with her dancing diva daughter and an assortment of pets.