Review: A Night of Wickedness by JD Nelson 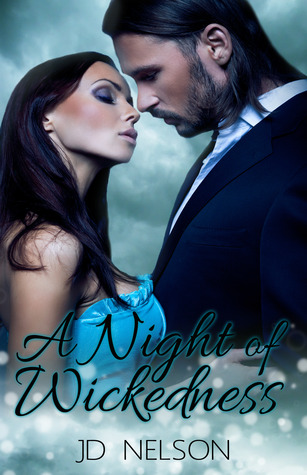 Obsidian Raines is everything I hate in a new neighbor. He's smart, sexy, and a wealthy vampire. Now, I know what you're thinking, he sounds hot, right? Well, he is hot, but that's not the point. If you were a nymph you would understand. Life for us is no picnic; most of us end up stalkers, sex addicts, and prostitutes. I am no exception to this rule, which is why I was sent to the middle of nowhere Alabama to be alone. How was I supposed to know that he would inadvertently destroy all of my therapist's progress with the first word that came out of his brooding, sarcastic mouth? In between Obsidian and my new friendship with Alpha werewolf, Oswin Morris, I'm pretty sure that my 'punishment' will turn out to be a catastrophe only a nymph could be capable of.

Korrina is a nymph, she has newly relocated to an isolated area her nearest neighbor is a vampire.
She has also been introduced to a werewolf.  But of these men are total hotties, and being a nymph of course she wants them both.  That's all fine and dandy, but she uses one to make the other jealous frequently throughout the book, my biggest dislike about this story is her using the men to make the other jealous and her lack of just choosing one man.  She says she loves them both, but she just runs back and forth between them.
It causes trouble, big trouble.
The story itself was beautifully written.
Obsidian (vampire) comes off like a total jerk, but he has his reasons and once you get to know him you understand.  To me, he actually seems like the better choice.
Oswin (alpha wolf) just a total pompous ass. He does what he can to keep her from Obsidian, and at one point gets Korrina in trouble again.  He saved her from trouble only to cause total uproar!
In the end, Korrina's choice is made for her.  At that time she realizes that, that's who she truly wanted anyway.
Alot of the back and forth and jealously could've been saved if the other would've actually tried to make their point about the other man.  Instead of "He's my enemy" or "He's a murderer", can I get a little background or you want to back that up with some info so I say away from him?
Let's just say Korrina's One Night of Wickedness gets her in trouble!!  Its still a great read.  Has lots of steamy hot sex, sex outdoors, public sex, a little bit of dominance!
I was given my "signed" copy as a gift from the author.

JD Nelson lives in California with her husband and three cats who think they're dogs. Always short on time, she has long ago mastered the art of procrastination, and was recently crowned Procrastinator of the Year by her editor, which is only slightly better than her being voted Most likely to waste time by watching Vampire Movies by her readers last year. All jokes aside, JD is a boringly normal person who thinks that coffee pretty much fixes everything, as long as it's before 6:30AM. When she's not spending time with her amazing husband (also a form of procrastinating), you can find her writing (not procrastinating!), reading (ahem...procrastinating), or on her commute to her day job (necessary procrastinating).

The Fire Within the Night
Amazon
Goodreads

All I Want for Christmas is My Two Front Fangs
Coming Soon
Goodreads
Posted by Alisa Jenkins at 4:30 AM