Review: Love Story of a Reaper 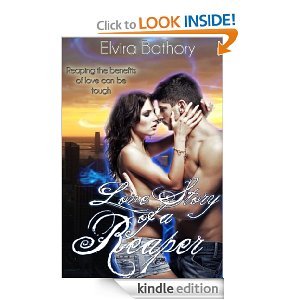 What would you do if you found out that you weren’t like everybody else?

That you were special but only in a way that no one could find out about?

What lengths would you go to prove yourself to your family?

A family that you didn’t know you had?

Kymber was moving through life, with a part time minimum wage job and few friends. She was different from other people, and they treated her that way. She was happy with her life, though. Until the day she met Kheelan. That is when her life was turned upside down. She finds out that she isn’t even human, and that a family, she wasn’t aware she had, needed her to complete a mission.

As Kymber and Kheelan's adventure progresses, will their focus on business remain professional? Or will their growing passion take over?

A great short story that could be the beginning of a great series. I liked the spin of a 'grim reaper' as a main character and how it twisted in to the Fae world as well.
I think that Kymber was a bit too accepting of Kheelan when he approached her. Maybe if there had been a bit more of a story line into why she thought herself different from other people and why she was accepting of meeting with him to discuss her 'difference". Just a couple extra paragraphs in the beginning.
Overall I like the story. It laid roots to what would be a great novel if written thoroughly. I also think that maybe this should of been a 1.5 instead of a 1, IF it were to be a series with #1 being the story of Kheelan's brother. That would of lead into more of the problems that seemed to lead to the hurriedness of 'overthrowing' Kheelan's father.
Would I read another of Ms. Bathory's books....absolutely! So please don't keep me waiting ;)