Confessions of A Queen B* by Crista McHugh 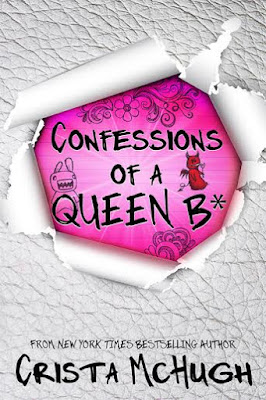 Alexis Wyndham is the other type of Queen B—the Queen Bitch.
After years of being the subject of ridicule, she revels in her ability to make the in-crowd cower via the exposés on her blog, The Eastline Spy. Now that she's carved out her place in the high school hierarchy, she uses her position to help the unpopular kids walking the hallways.
Saving a freshman from bullies? Check.
Swapping insults with the head cheerleader? Check.
Falling for the star quarterback? So not a part of her plan.
But when Brett offers to help her solve the mystery of who’s posting X-rated videos from the girls’ locker room, she’ll have to swallow her pride and learn to see past the high school stereotypes she’s never questioned—until now.

Crista McHugh is an award-winning author of fantasy and romance who writes heroines who are smart, sexy and anything but ordinary. She currently lives in the Audi-filled suburbs of Seattle with her husband and two children, maintaining her alter ego of mild-mannered physician by day while she continues to pursue writing on nights and weekends.
She is an active member of the Romance Writers of America (including the Greater Seattle Chapter and the Seattle EastsideChapters), and Romance Divas.
Just for laughs, here are some of the jobs she’s had in the past to pay the bills: barista, bartender, sommelier, stagehand, actress, morgue attendant, and autopsy assistant.
And she’s also a recovering LARPer. (She blames it on her crazy college days)

Brett texted me to say he’d meet me at my locker for the doll handoff. I drove to school, my stomach doing little flip-flops of glee, anticipating that Brett would look as miserable as I felt yesterday.
No such luck.
If anything, the jerk looked better than normal.
Damn it.
He grinned and started unstrapping the carrier when he saw me. “Made it on time today, eh?”
“How can you be so cheerful after that thing kept screaming all night?”
“I’ve got the diaper-bottle-burp drill down. Once you have it, you’ll see it’s easier with babies.” He held out the carrier with the doll still strapped inside. “Should I help you put it on again?”
“So you can feel me up in the process?” He was so perfect, it was infuriating, so I had to find a flaw in him. In this case, it was turning his offer to help into a dick move.
“If that’s an invitation…”
Sure, if you want to, that traitorous little voice in my head replied.
“It’s not,” I snapped, ignoring the rush of heat that flowed along the surface of my skin while I tried to navigate my arms through the confusing tangle of straps.
He raised both brows. “Are you always this stubborn?”
“I don’t need a man to help me out with something as simple as this.” Except somehow, I’d managed to put the carrier on upside down and was holding the doll by its head to keep it from falling out.
“May I please help you so we don’t both end up with Fs because you dropped the kid?” He came closer, that annoying bemused grin still on his face, and took the doll out of the carrier. “Just unbuckle it here, turn it around, and secure everything before you try to put the baby in.”
His finger brushed the area along my ribs when he pointed out where I should unbuckle it, and a delicious shiver raced up my spine. I hated my hormones sometimes, especially when they overruled my brain concerning Brett Pederson. It was screaming for me to run away before I made a fool of myself by drooling over him, but I ended up inching closer to him. I’d always thought his eyes were plain brown, but the sun streaming in from the skylight above revealed tiny flecks of green and gold in them.
And those eyes were fixed right on me.
“Yo, Pederson, you’re playing a dangerous game getting that close to her without protective equipment on,” Sanchez shouted from down the hall, ruining what had been a “moment.”
As if I was capable of having a moment with Brett.
“I’ve got it under control,” Brett shouted back before dropping his voice to add, “You’re not going to hurt me, right?”
“Depends.”
“On what?” He wasn’t backing away, so neither would I.
“On how pissed off you’re going to make me.”
“And how would I piss you off?”
He was baiting me. I knew he was, and yet I played right along with him. “Your existence pisses me off.”
“Is that all?” His grin widened.
The asshole was mocking me.
“Do I need to make you a list?” I shoved him back and adjusted the carrier, following his instructions.
“Maybe. How long would that list be?”
I snatched the doll back and tucked it away. “Not worth my time.”
I’d barely made it ten feet before Richard fell into step beside me. “Okay, what is going on between you two, because that was some serious tension?”
“The only tension between us is the one in my arm that’s keeping me from slapping that arrogant little smirk off his face.”
Richard pretended to cover his mouth, mimicking a shocked expression. “Oh my God, you’ve progressed to violent thoughts. Do we need to schedule an intervention at the fro-yo place this afternoon so we get all that hostility out over a cup of mocha chocolate chip?”
“No, thank you.” I liked my hostility right where it was. It was the only thing keeping me from admitting that yeah, maybe I was slightly attracted to Brett.
I glanced over my shoulder just in time to see Summer looping her arm through his. The message was as clear as day. He was hers, and I had no chance in hell of ending up with someone like him.
Not that I’d want to. It would mean I’d have to be nice to Sanchez and the rest of the team.
But that didn’t keep me from thinking about how things might be different if we weren’t in this tiny microcosm of hell called high school.

Email ThisBlogThis!Share to TwitterShare to FacebookShare to Pinterest
Labels: 18+, NewAdult