The Rancher and the Renegade by Jackson D'Lynne Blitz & Review

The Rancher and the Renegade by Jackson D’Lynne
THE RANCHER AND THE RENEGADE by Jackson D’Lynne is a thrilling, hot time-travel romance about a woman broken by tragedy, the sexy rancher determined to love her no matter what, and the evil they must destroy to survive. Readers will be captured by the story, enchanted by the romance, and thrilled by the edge of your seat suspense. If you like the flavor or Kresley Cole’s Immortals After Dark series and the chills of thriller master, Dean Koontz, you’ll love Jackson D’Lynne’s latest offering. 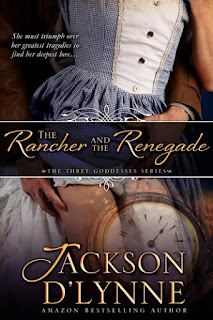 She must triumph over her greatest tragedies to find her deepest love…
When a heartbreaking tragedy rips undercover DEA agent Marisol Sanchez’s life apart she has nothing and no one left. With the cold steel of a Glock 21 in her mouth, she’s resigned to taking her own life. Before she can pull the trigger, a strange power interferes, compelling her to wind a mysterious golden pocket watch—a watch that propels her backward through time to 1856 Texas.
Harvard lawyer turned cattle rancher Tyrence Barrett is in a battle he can’t win as desperadoes raid the settlements along the creek, burning and murdering their way through the land. On a routine inspection of his property, Ty stumbles upon a beautiful migrant woman who seems out of place, completely irresistible, and strangely compelling…
When evil threatens to destroy the ranch, Mari must use her wits and determination to help beat back the raiders who seek to clear the land and claim the water in the creek for themselves. With Ty by her side, Mari must learn to forgive herself, rely on the strength of others, and to love despite the overwhelming fear of loss.
Can a displaced renegade help a Lone Star rancher defend his home against an encroaching evil? Will the time lost Mari give in to the desperate sorrow devouring her heart? Or will Ty show her that a rancher and a renegade can find love and a happily ever after?
Find out more at: Amazon | Barnes & Noble | BAM

Praise for The Three Goddesses series:
“Jackson has a distinctive voice and sweeps readers into her story.” – Diana Cosby, bestselling author of The Oath Trilogy

“Having read and loved The Diva and the Duke, I was looking really forward to reading the next in the series, and The Rancher and the Renegade did not disappoint! Another win from Jackson D'Lynne that kept me well-entertained and turning the pages to find out what happened next.” – Nadine Mutas, author of Blood, Pain, and Pleasure


“Let me just say that this author knows how to spin a tale! I loved every moment of this book [The Diva and the Duke], from the first sentence to the last! It has paranormal, time travel, love and mystery...you just didn't know which turn led you where.” – Wendy, Eskimo Princess Reviews
“…Jackson blurs the line between historical and contemporary, suspense and romance, to capture it all in one storyline.” – Anabelle Bryant, author of the bestselling Three Regency Rogues trilogy

The second installment in this time traveling series did not let me down and I can't wait to read the third! (Please don't make me wait long Ms. D'Lynne!) This time I was taken back to 1850's Texas where the mouth watering rancher is fighting for his land with a blood thirsty gang that will stop at nothing to get him gone. Thrown in the middle is the sassy mouthed Mari who was pulled from her time just when she was hitting rock bottom. I turned the pages to see what she would do next AND to keep reading about the ethereal gypsy Perez and all his crazy antics. I simply LOVE this series!!! So thankful that D'Lynne is a face paced writer that keeps me turning the pages to see what she comes up with next!!!

Other Books in The Three Goddesses Series

THE DIVA AND THE DUKE
When a 21st century diva...
Haven Edwards is a sensual, intelligent, 21st century diva with an "exotic" career. Wanting nothing more than to move past her ugly divorce, she attends an adults only Carnal-val where a strangely glowing pocket watch calls to her, compelling her to steal it. Overcome with its power, she winds it. A portal opens beneath her feet, and hurtles her back through time to 1817 where she crashes into the life of the very proper, very sexy, Logan Dunham. A duke with a deep distrust of beautiful women, Logan can't understand his staggering desire for the woman with the quick wit, and jade green eyes-the woman who haunted his dreams long before they met.
...meets a 19th century duke...
Haven is determined to find a way home, but she can't shake her hunger for the dark, brooding duke. Logan's a duke, he's out of her league, right? So why does her heart beat a little faster whenever he is near? Why does her mind conjure images of happily ever after?
...the sparks fly, tempers and passions flare, and two souls touch across time.
One touch, and they are consumed by their desire. But before they can untangle their feelings for one another, a sociopath with a god complex and a knife fetish sets his evil intents on Haven. In order to save her life, Logan must destroy the demons of his past, and learn to trust a power he doesn't understand. Can he get to her in time? Will the time-swept diva be lost forever, or will the diva get her duke?
Book 1 is available at Amazon

Amazon bestselling author Jackson D’Lynne is the alter-ego of a hardworking wife and mother of four, transplanted from California and now stuck in small town Pennsylvania. Always an avid reader, she’s been devouring books since middle school. Nowadays, when she’s not reading, she’s writing time travel romance, paranormal romance, and whatever else the Muse commands. Jackson loves hearing from her fans, so find her on Facebook and Twitter where you can keep up with what’s going on in her career.