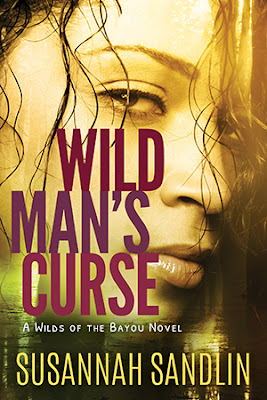 While on an early morning patrol in the swamps of Whiskey Bayou, Louisiana wildlife agent Gentry Broussard spots a man leaving the home of voodoo priestess Eva Savoie—a man who bears a startling resemblance to his brother, whom Gentry thought he had killed during a drug raid three years earlier. Shaken, the agent enters Eva’s cabin and makes a bloody discovery: the old woman has been brutally murdered.

With no jurisdiction over the case, he’s forced to leave the investigation to the local sheriff, until Eva’s beautiful heir, Celestine, receives a series of gruesome threats. As Gentry’s involvement deepens and more victims turn up, can he untangle the secrets behind Eva’s murder and protect Celestine from the same fate? Or will an old family curse finally have its way?

Susannah Sandlin is the author of the award-winning Penton Legacy paranormal romance series and The Collectors romantic suspense series. Writing as Suzanne Johnson, she is the author of the Sentinels of New Orleans urban fantasy series and several urban fantasy novellas. Susannah was a finalist for the RT Book Reviews Reviewers’ Choice Awards in both 2014 and 2015, and she is the 2015 winner of the Holt Medallion for romantic suspense, the 2015 Booksellers’ Best Award for romantic suspense, and the 2013 winner of the Holt Medallion for paranormal romance. A longtime New Orleanian, she currently lives in Auburn, Alabama, which explains her penchant for SEC football, gators, and cheap Mardi Gras trinkets.

5 Tips for Breaking a Voodoo Curse by Susannah Sandlin

In WILD MAN’S CURSE, set deep in the heart of South Louisiana, both hero Gentry Broussard, a senior wildlife agent, and Celestine Savoie, a singer/songwriter, are trying to escape their own family curses. Gentry is haunted by the guilt of being forced to kill his brother in a drug raid three years earlier—a brother who seems to have turned up alive and on a deadly mission. Celestine is the unknowing heiress to a four-generation curse on her family resulting from the misdeeds of a great-great grandfather and the Savoie traditions of voodoo and Native American mysticism.

When their curses intertwine deep in the marshes and bayous of Terrebonne Parish, Louisiana, Gentry will have to shed his own regrets and guilt if he has any hopes of saving Celestine. Even if it means killing his own brother—again.

Celestine, however, has a skill that Gentry doesn’t know about—the rites of her ancestors handed down by her great-aunt, including the throwing of the bones, an ancient form of divination. Depending on how the bones—usually dried chicken bones—fall in relation to each other, or so Celestine believes, she can foretell the future.

In the book, Celestine’s skills are a little rusty. Since then, however, she’s had time to bone up, so to speak, on ways to ward off voodoo curses. Here are five tips she suggests if you feel you’ve been cursed:
1)    Stay calm. Hexes and curses feed on fear, so the more you freak out, the more likely you are to fall victim to the curse.
2)    Find an amulet containing a stone or item of purity that has personal meaning to you. A small object kept from childhood, for example, or a piece of jewelry from a person you loved in your past that you cherish. You can hang it from your neck, preferably from a leather strap so that no properties of metal will be thrown into the mix.
3)    Take a ritual bath into which you have mixed some cleansing herbs. Celestine suggests hyssop, patchouli, and basil. Throw in a pinch of unrefined sea salt.
4)    Create a circle of protection if you feel physically threatened. Go to a safe space, close all the doors and windows, and run a line of unrefined sea salt around the bottom seal of every opening—don’t forget the fireplace! The salt will create a protective bond in your safe space. (If you aren’t sure if your space is safe, you could try throwing the bones. If the skull, which represents death, is touching another bone, try a new spot.)
5)    If you know the person’s name who has cursed you, light a white candle and write the person’s name on a sheet of paper. Fold the paper into a tight square, then place it in a sealed plastic container of water, making sure it’s submerged. Put the whole thing in the freezer—this binds the person’s ability to sustain his or her curse.
The toughest part, Celestine says, is knowing whether or not you have been cursed. If you don’t believe in it, then you’re safe. Well, unless you see three black dogs together. Or have persistent nightmares involving snakes.

Then again, sometimes, the evidence is hard to miss.

True story. Several years ago, while working in the publications office of a New Orleans university, I helped to hire a person who turned out to be a bad fit for the office and we had to hand him his walking papers. He left with three parting words to his supervisor: “You’ll regret this.”

The next morning, when she got to work, his supervisor entered her (locked) office to find two chicken leg bones—dried and yellowed—placed in an ‘X’ atop her computer keyboard.

I confess to nothing, but there might have been some salt spread around the office doors that day. As Celestine could tell you, it never hurts to be careful, just in case.