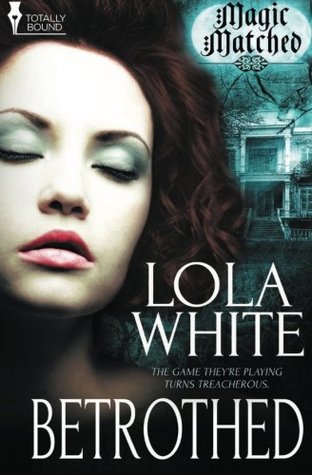 In witching society, magic and politics are the only things that matter, and marriages are arranged for advantage rather than love.

Humiliated by a string of broken betrothals, Ileana Lovasz only wants freedom from her manipulative grandfather. So when she’s forced into meeting her next suitor, she decides to give the budding relationship all she’s got.

Eliasz Levy simply wants an alliance with Ileana’s brother Silviu, a man rising through the witching ranks. That is, until the Lovasz woman arrives at his home and stirs up emotions Eliasz never thought to feel.

Silviu has bigger things on his mind than his sister’s marriage. Georgeanne Davenold, Silviu’s betrothed and the key to his rise in power, is back in his life after a ten-year separation that left her distrustful of his intentions. Their union is a novelty, spanning the divide between matriarchal and patriarchal Families. Their union is also alarming, combining the influence and magic of two witches only heard of in myth and legend.

Ileana, Eliasz, Silviu and Georgie must build an alliance that will help them all get what they want, but with too many lies and too many enemies, the game they’re playing turns treacherous.

When the two women come under attack, neither Silviu nor Eliasz knows which is the target. They only know that they will protect the women their hearts have claimed as their own, even though that means defying the traditions of witching society, risking every goal they hold dear and confronting the dangerous members of their own families.

Reader Advisory: This book is best read in sequence as part of a series. 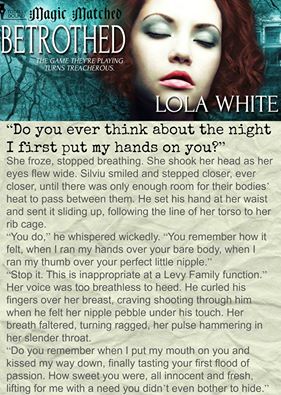 Holy Cow! OMG this book had me so glued to the pages it was unbelievable! I had to read every chance I had, whether I really had time or not.
Addictive to say the least.
I have to say, it is slightly different than most books about witches. But for adult readers only!!!!!!
Full of magic and sex. With a very suspenseful undertone. A surprise on every page.
I think that I NEED book 2, and probably many more of this series.

An extensive traveler who loves to incorporate various legends from around the world into her tales, Lola White likes to twist reality at its edges in her stories. She likes delving into the emotions of her characters, finding their strengths and weaknesses, and seeing (and showing) how they get themselves out of whatever trouble has found them—if they can.

You can learn more about her at http://lola-white.com/
Find her on Facebook athttps://www.facebook.com/authorlolawhite
Follow her on Tumblr athttp://authorlolawhite.tumblr.com/
Or Twitter https://twitter.com/authorLolaWhite and https://twitter.com/steamyreadslist
For news, exclusives and special deals, sign up for her newsletter! http://lola-white.com/sign-up-for-lola-whites-newsletter/