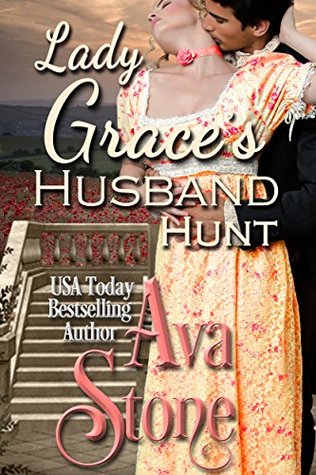 Hiding behind her quick wit and biting tongue, the last thing in the world Lady Grace Post wants is a husband. After all, if she can’t have the love of her life, why would she want some other man? Unfortunately, her Machiavellian matchmaking great-uncle, the Duke of Danby, has other plans for Grace and has decided it is past time for her to be wed. To keep the duke from selecting a fellow she doesn’t want, Grace begins her great husband hunt, very aware that her time is ticking away.

Oliver Ashbee, Earl of Prestwood, has never gotten over Grace. Watching her from afar, as she dances and flirts with other men, is enough to drive him to an early grave. Things would be different if he could court her, if he could hold her, if he could kiss her again. If things had been different she’d have been his wife long ago. But things aren’t different…

I'm actually not sure how I feel about this book yet.
It was really fast paced and enjoyable at the beginning. The fast paced continued through out the story, but my interest faded away.
I did like Mr. Lacy until the near the end, however he did have every right to act like he did. Yet he didn't believe Grace when she was trying to talk to him.
I know Grace was always in love with Oliver, but their situation was very hard to live with. I actually do wish he had left her alone though until it could change he made them both miserable. He truly had no right to be mad about Mr. Lacy

*I received my copy in exchange for an honest review
Posted by Unknown at 7:05 AM