Avenged by an Angel by Felicity Heaton Tour & Giveaway

New York Times best-selling paranormal romance author Felicity Heaton is here today for the book tour of her new paranormal romance release, Avenged by an Angel, the latest release in her popular Eternal Mates world.
There are now sixteen books in this series, but don’t worry, you can dive right on in with Avenged by an Angel, or start at the very beginning with Kissed by a Dark Prince, which is FREE at all retailers right now. Binge-read to your heart’s content!
If you love big worlds packed with detail and every paranormal species imaginable, together with hot alpha heroes and strong heroines bringing them to their knees, then this series is definitely for you. Plus, each book has a happily forever after and there are no cliff-hangers, because there’s nothing worse than a cliff-hanger!

Avenged by an Angel (Eternal Mates Paranormal Romance Series Book 16)
by Felicity Heaton
Duty should mean everything to the Fourth Commander of the Echelon angels. It did before he met her. Now, the only demon he wants to slay is the one that haunts the enchanting mortal huntress, and the temptation to hunt him in Hell, a realm that might kill him, is becoming impossible to resist.


Held captive by a dragon shifter in Hell, Emelia survived a torment that changed her in ways she hates. She wants her strength back. Her life back. To do that, she needs closure. To get that, she might have to trust not only a man again, but an immortal.
But when the price of vengeance is the soul of the angel bringing her back to life, will Emelia be willing to pay it?

Enter the grand tour-wide giveaway to win one of a $75, $50 or $25 Amazon Gift Card at the Avenged by an Angel book page. This giveaway is international and open to everyone, and ends at midnight on September 2nd. Enter now: http://www.felicityheaton.com/avenged-by-an-angel-paranormal-romance-book.php

Felicity Heaton is a New York Times and USA Today international best-selling author writing passionate paranormal romance books. In her books, she creates detailed worlds, twisting plots, mind-blowing action, intense emotion and heart-stopping romances with leading men that vary from dark deadly vampires to sexy shape-shifters and wicked werewolves, to sinful angels and hot demons! If you’re a fan of paranormal romance authors Lara Adrian, J R Ward, Sherrilyn Kenyon, Gena Showalter and Christine Feehan then you will enjoy her books too.
If you love your angels a little dark and wicked, the best-selling Her Angel series is for you. If you like strong, powerful, and dark vampires then try the Vampires Realm series or any of her stand-alone vampire romance books. If you’re looking for vampire romances that are sinful, passionate and erotic then try the best-selling London Vampires series. Seven sexy and sinful Greek god brothers can be your new addiction in the Guardians of Hades series. Or how about four hot alpha shifter brothers in her Cougar Creek Mates series? Or if you prefer huge detailed worlds filled with hot-blooded alpha males in every species, from elves to demons to dragons to shifters and angels, then take a look at the Eternal Mates series.
If you want to know more about Felicity, or want to get in touch, you can find her at the following places:
WEBSITE | BLOG | FACEBOOK | TWITTER | GOODREADS | INSTAGRAM

Posted by Alisa Jenkins at 7:11 AM No comments: 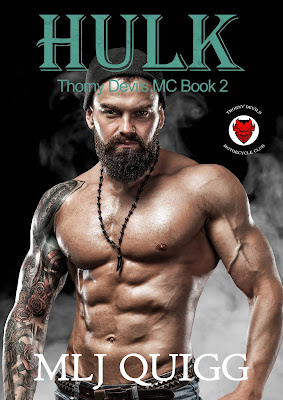 Blurb:
“As soon as I saw you, it was like a light shining down from the heavens. As I got to know you, I realized that light went soul deep, and I fell for you so hard.”
Hulk
After an accident and my girlfriend leaving, I didn’t think I’d find anyone to share my life with. Sure, I had my brother and the club, and I never thought I wanted anything more. That was until Claire walked into my life. She had a harrowing story behind her, and it forced my protective instincts forward, and they raged at full force. I simply had to get past the walls she’d built so tightly around her.
Claire
Some say amnesia is a new start, which is true. But what happens when you wake up one day and everything’s a blank. Let me tell you, it’s not fun but more like downright scary.
That was my life now. Sure, I’d made a family and new memories with Monique and the triplets, but when Monique reunited with Derrick, he came with a whole new family. Hulk was the Sergeant at Arms for the club and the man who would steal my heart. Unbeknownst to me, the man who had hurt me previously was closing in, and he wanted to finish what he’d started.
Will Hulk be able to save Claire from a madman, or will he be too late to have his angel with him forever? 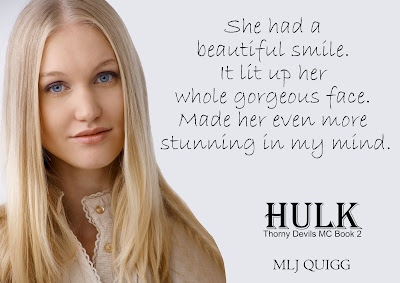 Australian author MLJ Quigg – lives in NSW, Australia, with her husband, three adult children, and six cats—yes, you heard that right, six.
Growing up in a huge family of eight kids was always noisy and didn’t give her enough alone time to unwind.
Books have always given her an outlet from the craziness that is her life. Nothing is better than curling up with a good story to take her mind off her surroundings.
As a new author, she hopes you enjoy her stories and helps you get out of your world and into hers for a few hours.
Author Links:
Facebook: https://www.facebook.com/authormljquigg/
Amazon: https://amzn.to/2Z7L45k
Goodreads: https://www.goodreads.com/author/show/18119036.M_L_J_Quigg
Buy Links:
Thor: https://amzn.to/2Z5Wkzs
Hulk: https://amzn.to/2Z9lddk 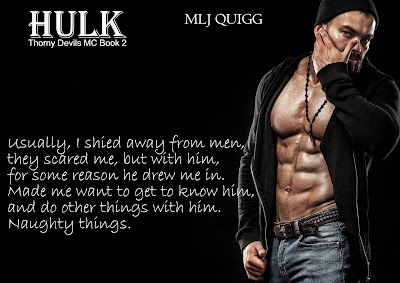 Posted by Alisa Jenkins at 1:44 AM No comments: 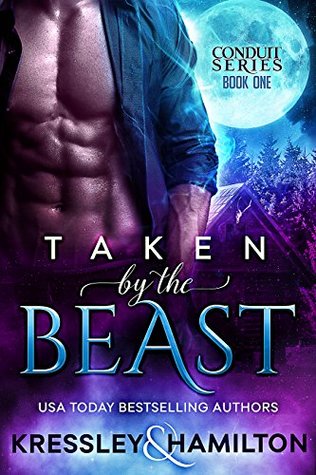 
It’s not until a missing girl is found chained up in Abram’s home that this beauty realizes one of her romantic interests is a beast.
When I took this job at New Haven’s first ever Night Club, it was just to try to get on my own two feet. I hadn’t expected to fall for my boss.
Now, I can’t seem to stay away, despite all the warning signs he’s hiding something from me. It’s not until I find a missing girl chained up in his home that I realize he’s a beast. And by then, it’s too late.
Magic is real, and I’m really in trouble. My boss might chain me up next, and I think I’d like it.
This hot alpha male shifter is sure to be your new favorite book boyfriend in this scorching hot beauty and the beast retelling! See what fans of Celia Kyle, Ilona Andrews, and J.R. Ward are calling their latest paranormal romance addiction.

Goodreads / Amazon / Barnes & Noble / Google Play
—
EXCERPT:
I shook my head. I didn’t want to stay here, in some place where they spun tales tall enough to make your best friend sleep with a gun under her pillow.


I didn’t want to be that person, not for anything. And something told me that if I stayed here long enough, I wouldn’t be able to help it.
No, I would go to sleep, wake up, collect the supplies I needed from town, and fix the stupid fence. Then I would get a job, save up like crazy, and make a break for it. Maybe I could call my (former) agent and beg him to take me back.


Hell, the Sears Catalog always needs models.
I punched my pillow, trying not to think about this ridiculous place, about all it had seen me lose.
“Idiots,” I muttered, climbing into bed. “They turn their town into a pressure cooker and then they make monsters out of thin—”
A sudden howling cut off my words.
Tensing, I threw off my covers and lurched for the window.
The sound was nothing. A dog, or something. I would prove that to myself.
I glared out into those goddamn woods. See, nothing. Absolutely—
A shadow moved between the trees, hulking and burly, but also tall. Too tall to be an animal.
I blinked hard, once, and then again. When I looked back, there was nothing there.
Stop it, Char.
This place would drive me crazy if I let it. It was nothing. An animal.
I got back in bed, trying to feel more New York and less New Haven.
But somewhere in the back of my mind, I couldn’t let go of the howl…or the markings…or the dead girl who looked just like me. 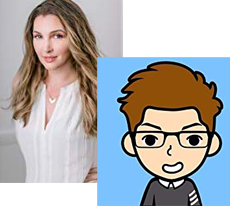 Represented by Rossano Trentin of TZLA, Rebecca has been published internationally, in three languages: English, German, and Hungarian.
Author links:
Website / Goodreads / Facebook / Twitter
--
Conner Kressley is a USA TODAY Bestselling Author. He is an avid reader and all around lover of storytelling. He's been obsessed with mythology, magic, and all the things that go bump in the night since he could remember. Also, pizza. But who isn't obsessed with pizza?
When he's not writing (or even when he is), Conner can be found in the western Texas watching old movies, geeking out over books (comic and otherwise)He loves hearing from his fans. So please, feel free to reach out on Facebook or through his website at connerkressleybooks.weebly.com
Author links:
Website / Facebook / Twitter
GIVEAWAY!
a Rafflecopter giveaway