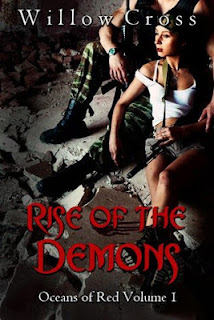 
Description:  By 2015 the streets of Los Angeles have been transformed from a thriving metropolis to a hostile world ravaged by demons bent on assimilating the human race. Standing between this total apocalypse of humanity and their chance for survival is 19 year old Remy Martin.

A warrior in her own right, trained to think on her feet and kill if the situation requires, she is flanked by her older brother and younger sister. Together, they devise a plan to take back the streets. Against the wishes of their father, who commands the resistance forces, they venture into unknown realms of the supernatural in a race against time with the fate of the entire world in their young hands.

Join them on their mission into darkness where death lies around every corner, it is virtually impossible to distinguish your enemies from your allies, and a single mistake could result in the annihilation of everyone you’ve ever known and loved


My Review:
Not a bad book, and it was interesting to have the Apocalypse with Demons instead of Zombies for a change. I liked Remy, she is a strong character. Shane and Greg, her siblings are strong too but not much detail about them, especially Greg. Their father is trying to run the "war" against the demons like a military war and its not working. The 3 siblings go out on their own to be turned and then turn themselves back so they can still have some of the demon powers to fight the "war". Remy is unable to be turned, and meets Daelen. Daelen realizes she is the one who can win the "war". And then the story stops there, where Daelen tells Remy he can help her. Now I don't mind a series, but I don't like an abrupt cutoff like this was. Yes, I know it needs a stopping point but it could've been a better written stopping point I think. I think I would give 3 1/2 stars for this, because of the Demons instead of Zombies. But its just not my cup of tea theme.
Posted by Alisa Jenkins at 5:33 AM