The Shack by Wm. Paul Young 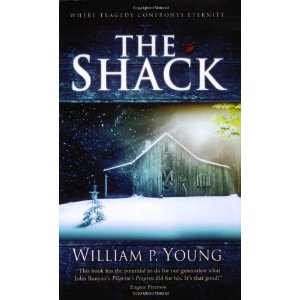 Buy on Amazon
Description:
Mackenzie Allen Philip's youngest daughter, Missy, has been abducted during a family vacation and evidence that she may have been brutally murdered is found in an abandoned shack deep in the Oregon wilderness. Four years later, in the midst of his Great Sadness, Mack receives a suspicious note, apparently from God, inviting him back to that shack for a weekend. Against his better judgment he arrives at the shack on a wintry afternoon and walks back into his darkest nightmare. What he finds there will change Mack's world forever. In a world where religion seems to grow increasingly irrelevant THE SHACK wrestles with the timeless question: Where is God in a world so filled with unspeakable pain? The answers Mack gets will astound you and perhaps transform you as much as it did him.

My Review:
I loved this book.  It made me sad, scared, angry and I laughed too.  It gave me so many emotions.  I have read it 3 times, honestly.  I read it once a couple years ago, then pasted it along the family I have no idea who has it now.  But I made hubby go buy it for me again so I could read once more.  Then I started reading it a third time aloud to hubby.  He made me stop, he couldn't take the emotions.
Mackenzie "Mac" goes through an adventure, so to say, four years after the kidnapping of his youngest daughter.  He spends the weekend in a cabin in the mountains, speaking with God, the Son and the Holy Spirit.  He has his eyes opened for him on life in such a new way.
I would recommend this book to any person, not just for spiritual guidance or anything like that.  But for one great read but be prepared for emotions throughout this book.
Posted by Alisa Jenkins at 1:52 PM