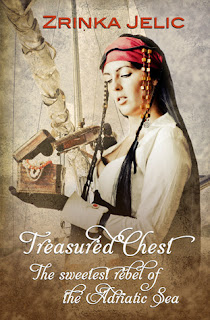 When Carmen Ventura takes up her post as commander of the Strega, she becomes the new Captain Sirena, the legendary pirate most people think is just a myth created to scare children. Her first quest is to search for the “treasured chest” hidden by her predecessor. But before she can even begin the hunt, she runs into Marko Lucin, captain of the Levant and Carmen’s most insane adventure yet.


How can the most beautiful woman he’s ever seen be a bloody pirate?

Never one to pass up an adventure, especially where pretty women are concerned, Marko finds his ultimate challenge in Carmen. Not only does he fall for her courage, spunk, and intelligence, but the lady pirate can also help him get what he wants—the famous treasure everyone whispers about. His only problem—how long can he play the charming captain before she discovers his true intentions?

My Review:
This book was given to me by the Author in exchange for an honest review.

I'll admit, it took me awhile to read this.  Its not what I usually read, although it its a Historical Romance.  But this story is very different.  And I liked the pirates, I love Pirates.

This was a new type of Historical Romance book for me to read.  It took alittle while to get into the story, and it was easy to stop reading at any time.  The main characters are good.  There is not a lot of humor in the book, but there are moments to make you smile.  This is a serious read more than anything, it does describe how life of a pirate probably was.
As I got closer to the end, I almost wondered if there would be a Happy Ending, but I was not disappointed.  It all turned out in the end, and I like how the author closed out the book.