Alisa's Review: If the Viscount Falls by Sabrina Jeffries 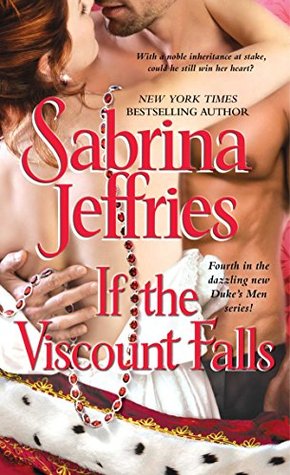 The heir presumptive to the Viscount Rathmoor, Dominick Manton once had his heart’s desire within reach—a bright future as a barrister and engagement to Jane Vernon, a wealthy baron’s daughter. Then a shattering betrayal by his vindictive brother George snatched away Dom’s inheritance and his hopes of offering Jane a secure future. Brokenhearted, and attempting to end their engagement without destroying Jane’s reputation, Dom staged a betrayal of his own to convince her that he’s not the husband-to-be that she thought.

Now George is gone and the viscountcy restored to Dom, since his brother’s widow, Nancy—Jane’s cousin and closest confidant—never bore an heir. But when Nancy goes missing, a panicked Jane calls on her former fiancé to track down her cousin. Dom knows the mistakes of the past may be unforgiveable—but now, entangled together in mystery and danger, will they rekindle a passionate longing that was never lost to begin with?

Wonderful addition to the series.
How long is too long to wait for the one you love?  Well for Jane, she thought she was done waiting, until having to spend time with Dom again.
Follow Jane and Dom as they travel all over looking for someone and realize that they both wish to be together.  Or do they want to be together after 12 years of waiting.
This story is very well written, and you can feel all of Jane's emotions.
You don't have to read the whole series in order, but it does help.
Sometimes, Dom's overbearing attitude is a little too much for Jane (and his family) but he thinks he is doing what is best.  Until one night, he realizes he doesn't have to speak or act in that nature for things to happen.  Sometimes it's better to ask than command.
Jane is tired of everyone treating her like she is fragile.
Ms. Jeffries does throw in a little suspense for us.
My copy was provided by Netgalley for review.

Amazon: http://amzn.to/1vtPhB1
Barnes and Noble: http://bit.ly/1tQZqaj
Posted by Alisa Jenkins at 2:30 AM