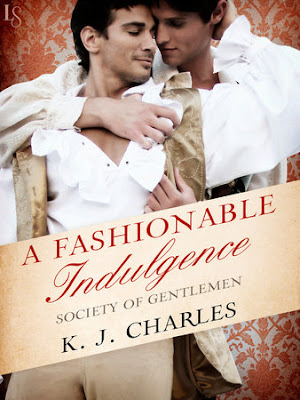 In the first novel of an explosive new series from K. J. Charles, a young gentleman and his elegant mentor fight for love in a world of wealth, power, and manipulation.

When he learns that he could be the heir to an unexpected fortune, Harry Vane rejects his past as a Radical fighting for government reform and sets about wooing his lovely cousin. But his heart is captured instead by the most beautiful, chic man he’s ever met: the dandy tasked with instructing him in the manners and style of the ton. Harry’s new station demands conformity—and yet the one thing he desires is a taste of the wrong pair of lips.

After witnessing firsthand the horrors of Waterloo, Julius Norreys sought refuge behind the luxurious facade of the upper crust. Now he concerns himself exclusively with the cut of his coat and the quality of his boots. And yet his protégé is so unblemished by cynicism that he inspires the first flare of genuine desire Julius has felt in years. He cannot protect Harry from the worst excesses of society. But together they can withstand the high price of passion.

Excerpt
London, May 1819
Harry was stacking revolutionary polemics into piles when the knock came on the shop door above them.
He jolted, clutching the papers. George, crouching on the floor by the press, cursed under his breath. “Who’s that?”
“Is the door bolted?” Silas demanded.
“I—yes, I’m sure it is.” Harry could feel the sweat spring, despite the damp chill of the cellar beneath Theobald’s Bookshop. Silas cocked his head, listening. After a few seconds of silence, there was another knock.
“What if it’s the police?” George hissed. “What if it’s the soldiery?”
“Quiet,” Silas snapped. “Just a customer, like as not. They’ll go.”
Of course it was a customer, Harry told himself. It wasn’t the police or the soldiery. They’d have broken the door down.
He glanced down at the piles of handbills. They proclaimed, in great black still-damp letters, An End to the Tyranny of the Hanoverians, Bloated Leeches on the Body of England, that Draw Blood yet Leave their Patient Unheal’d. Silas had a turn of phrase that had seen him gaoled for seditionary libel once already, and this pamphlet was stark treason. If they were caught with these, all three of them would be going to some dark, stinking gaol, likely after a good flogging. And there was no way out, no way to disguise the press, nowhere to hide the evidence. . . .
Harry stared at his fingers, stained an incriminating black. Every nerve he possessed was stretched in anticipation. Even so, he jumped when the knock came a third time.
Silas put his spanner down and strode to the little wooden flight of stairs, brushing paper dust off his ink-stained hands. Harry heard him swear under his breath. The bolt rattled, and then the heavy door was pulled open with a forceful thump.
“You again.” Silas didn’t sound welcoming.
“Indeed, Mr. Mason.”
Harry clapped his hands to his mouth. George shot him an accusing glare. They both recognized the dry, educated voice.
Your bloody latitat! George mouthed silently and furiously, jabbing a finger at Harry.
His lawyer. Or, rather, the lawyer who had come here in search of Harry twice already. Silas had packed him off with barefaced denials on both occasions: nothing good came of lawyers. But now he was back again, looking for Harry, who lurked in the ink-stinking cellar running out treasonous polemics on a hand press.
Now inside the shop, the lawyer was speaking with unpleasant authority. “Your denials will not serve, Mr. Mason. I seek Mr. Harry Vane, passing under the surname of Gordon. I know he is here. I will speak to him and you will not gainsay me.”
Silas growled. There was no other word for it: he sounded like a mastiff. Harry could imagine him leaning forward, broad shoulders set and muscles thickening. “Unless you’ve a warrant, take yourself off before I help you out of here.”
There was a slight scuff of retreating feet, but the lawyer’s next words sounded testy, rather than alarmed. “Sir, I have no intention of arresting Mr. Vane. I have information to his advantage.”
George rolled his eyes. They all knew that one.
“Aye, well, if any such fellow wants advantage from you, he’ll come and find you. Out.”
“You do your friend a disservice, sir.” The lawyer’s voice was rather faint, as though he’d stepped outside. “Tell him to contact me—”
The door slammed shut. Harry let out a long breath, sagging back against the grimy wall. “God. God.”
“Aye.” George stuck his grubby hands in his pockets to hide their shake. “What’s this about?”
“I’ve no idea.”
“Why didn’t you go up, eh? Ask the old pettifogger what he wants with you? Easier to hide behind Silas, eh?” George sounded a great deal braver now that the man had gone. Typical George Charkin, all piss and wind, ever ready to seize on Harry’s fears and forget his own. He hadn’t been arrested yet.
“He’s a good man to hide behind,” Harry said, as the subject of their discussion clomped down the stairs, nail-studded soles clacking on the wood. “Silas . . .”
“That lawyer again.” Silas’s face was grimmer than usual. “You can’t think what he wants with you?”
“I’ve no idea. Unless— You don’t think it’s the warrant, do you, Silas? From when I was a boy?” That had been preying on his mind since the lawyer had first come.
Evidently it had occurred to Silas too because he was shaking his head as Harry spoke. “They’d send bluecoats or red for you then. No, that’s not it. Maybe someone thinks you know something useful.” He considered Harry for a moment then made a face, dismissing the possibility in a rather unflattering manner. “You must have some idea.”
Harry threw his hands up helplessly. “None in the world. For all I know there is something to my advantage out there. Maybe I’ve come into a fortune.”
George cackled. “Aye, that’s it. You’re the Regent’s true son, hidden away by the Brunswick sow to spite her Husband-Hog.” That came straight from their last pamphlet on the royal family. Nobody could accuse Silas of an excess of monarchical enthusiasm. “We’ll all be riding in a golden carriage and sleeping on feather beds by week’s end.”
“All?” Harry struck a dandyish pose and fluttered an imaginary fan. “My dear louse-ridden fellow, you shall not sully my feather bed with your common flesh.”

K. J. Charles is a writer and freelance editor. She lives in London with her husband, two kids, an out-of-control garden, and an increasingly murderous cat.