How to Woo a Wallflower by Christy Carlyle Tour & Giveaway

How To Woo A Wallflower by Christy Carlyle 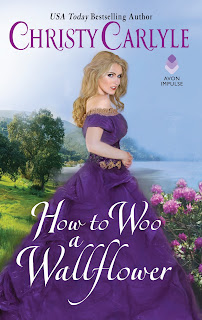 Clarissa Ruthven was born to be a proper lady, but she’s never wanted to live up to the expectations her late father set. Determined to use her inheritance to help the less fortunate women of London, she’s devastated to learn that she won’t be inheriting anything until she marries, a fate she has no interest in. Unwilling to let go of her plans, Clary works at Ruthven Publishing for Gabriel Adamson, a man who’s always hated her. She’s always returned the feeling, but as she begins to turn her family’s publishing company upside down, she finds herself unable to forget her handsome boss.

Gabriel Adamson believes in order. He certainly doesn’t believe Clary should be sticking her nose in the publishing company, and she definitely has no business invading his every thought. But Gabe soon finds he can’t resist Clary’s sense of freedom or her passionate kisses and he starts to crave everything she’s willing to give him.

Especially When It Comes to Love…

When Gabe’s dark past comes back to haunt him, he’ll do anything to make sure that Clary isn’t hurt…even if it means giving up the only woman he’s ever loved.

“Don’t assume every young lady is in need of rescue. Some of us wish to be a heroine who fights her own battles.”
—Journal of Clary Ruthven
London, 1899
Whitechapel repulsed Gabriel Adamson.
Grime and smoke hung so thick in the air that he could taste grit on his tongue. Narrow lanes conspired to trap the neighborhood’s fetid stench, and its tenements loomed above his head as if they’d crush him under the weight of their cramped, miserable inhabitants.
Now that he could afford proper togs for the first time in his life, he took care selecting the finest fabrics for his tailored suits and shirts. Today, he feared every stitch he’d donned would reek from the East End’s noxious stew of ash and muck.
The rain had been on and off and on all morning, but the heavens showed no mercy in a place like this. The sky opened the moment he alighted from the hansom cab, fat drops pelting his hat like the clatter of horses’ hooves on cobblestones.
Tugging up his fur-lined collar, he lengthened his stride and ducked under the awning of a grimy-windowed shop. He stared across the lane at Number 12 Doncaster.
The building slouched toward the street, its wooden frame worn by time and eaten away by moisture. The brick buildings buttressing each side were smart and modern by comparison, though their red bricks had been smoked to an oily black too.
As he gazed up at the house, echoes rang in his head. Raging shouts and desperate cries. The thud of fists on flesh. Bone meeting bone.
Peg Delaney was a cruel woman, but she was nobody’s fool. Gabe doubted she’d still be eking out a living in the last place he’d seen her. This venture was a fool’s errand.
He drew in a ragged breath, biting back a curse.
At least he’d had the good sense not to tell Sara of his trip. He couldn’t bear to dash his sister’s hopes, nor could he stand watching her fret over their mother’s fate when she should be focusing on her future and finally securing a bit of long-delayed happiness.
When the rain slowed to a sparse patter, he dashed across the narrow lane and knocked at the door. No answer came, and he suspected the landlord was far in his cups by this hour. The man had always been a wastrel. Trying the latch, he found the door unlocked and stepped into the dark, musty vestibule, choking on memories and stale air.
A discordant strain of music—a bow scratching at violin strings—echoed from upstairs. Gabe started up the worn slats. The wood creaked under his weight.
His mother’s door stood ajar, and nausea clawed its way up his throat when he caught a hint of her cheap perfume on the air. Bracing a gloved fist against the wood, he pushed inside and held his breath. Amid dried leaves and a cascade of cobwebs, the stench of rot turned his gut inside out.
Except for a single overturned chair, the room contained no furniture. Nothing hung on the walls. No personal effects decorated the space. She’d abandoned this place long ago, and no one had given a damn about the miserable lodging room since. Water ran down the walls, leaking from loose roof tiles.


Gabe strode to the back of the room and gripped a moldy edge of loosened wallpaper. Peeling back the paper revealed a gaping hole in the plaster. Reaching inside, he scraped his fingers around in the dust and dark until he felt a rounded shape. He tugged the object forward, grasping the tiny horse head in his hand.

LINK: https://goo.gl/LJYeCF
GIVEAWAY TERMS & CONDITIONS:  Open to US shipping addresses only. Two winners will each receive a paperback copy of How to Woo a Wallflower by Christy Carlyle.  This giveaway is administered by Pure Textuality PR on behalf of Avon Romance.  Giveaway ends 11/24/2017 @ 11:59pm EST. Avon Romance will send the winning copies out to the winner directly. Limit one entry per reader and mailing address.  Duplicates will be deleted.

Fueled by Pacific Northwest coffee and inspired by multiple viewings of every British costume drama she can get her hands on, USA Today bestselling author Christy Carlyle writes sensual historical romance set in the Victorian era. She loves heroes who struggle against all odds and heroines who are ahead of their time. A former teacher with a degree in history, she finds there's nothing better than being able to combine her love of the past with a die-hard belief in happy endings.