The darkness is rising and one man stands against it: the exorcist mage Simon Alliant. But in Baltimore, he finally meets his match...a part-mortal divinity with the power to whisper away demons.

Simon Alliant is an exorcist who battles demons, whether he wants to or not. Sometimes it's not so bad...he gets to play with magic, after all. But for Simon, magic represents a demon of another kind. He's addicted to magic and it takes more than a handful of charms to keep that particular demon at bay.

Chiara is part Light, part Dark, and stubbornly mortal. The woman has a way with words: she literally talks demons into abandoning their human hosts. Simon thinks that's not the only trick she has up her sleeve-and that's pretty high praise coming from a mage like him.

As intriguing as that may be, Simon has too many reasons to distrust her...one of them being his more-or-less partner, an angelic Watcher. Amidst all the celestial warnings of the rising dark comes a new prophesy that makes him wonder: is Chiara a threat to him and all of mankind?

Or will she be his salvation?
Amazon
Excerpt: CHARM CITY: The Demon Whisperer #1 by Ash Krafton

Hi! Welcome to another stop on the Haunted Halloween Spooktacular blog hop!

I'm Ash Krafton and I'm a writer of all things speculative fiction. I especially enjoy writing novel-length urban fantasy…and recently I celebrated the release of the first book in a new series. CHARM CITY is about an exorcist mage living in Baltimore. Simon Alliant sees it all—angels, demons, and those who may be a little bit of both. On top of everything else, he gets to play with magic. Now, if only it didn't feel like a drug to him…

The story can be a little bit dark at times, but it's not horrific or hopeless. I like the dark. I like the shadows. Why wouldn't I? I'm the girl who thinks the ideal fictional boyfriend is Jack Skellington. (Makes trips to Disney fun for the whole family ;^) )

And it's all because I adore Halloween.

My enthusiasm for Halloween is long-established and well-known (just check my Instagram: https://www.instagram.com/p/6--VFEHg8u/?taken-by=ash_krafton). I'm the neighbor who keeps Halloween decorations up year 'round, has a life-sized toy skeleton (named Napoleon) who accompanies me on long car rides, and who lives every day like it's Edgar Allan Poe's birthday. Halloween isn't a one-day celebration (or, in the case of someone who works in retail, a six-week event.) It's a philosophy, an attitude, a way of life.

I love scary movies and love being scared silly. I know 90% of it is in my head but I'm in my forties and STILL can't look in a mirror in a darkened room. (You know why. Her first name is Bloody and her other name is NO I WON'T SAY IT) My desk has, among other things, a skull in a jar on it (with pretty LED lights. It's festive) and I own more than one Tarot set.

But not a Ouija Board. Nuh, uh. That's bad juju.

I suppose my guests are a little confused by my office décor (and the Grim Reaper mannequin in the basement) especially since there is another theme prevalent in my home: Catholicism. I'm an Irish-Polish Catholic and for every macabre knick-knack there's a Crucifix or a saint statue or other blessed item.

I'm pretty sure it aggravates my mother, who has learned to choose carefully where to look when she visits and tends to stay in the kitchen. (No skulls in there. Not good kitchen aesthetic.) But she knows me. She knows how my brain works and knows that when I call and say "I have a new book coming out!" odds are it's going to be something she doesn't think a good Catholic girl should be reading. But she accepts it, in that way moms love even the goofiest of their children. I love Halloween. She loves me. It's just the way it is.

I've dealt with anti-Halloween prejudice all my life. In high school, I owned a vampire cape, and I'm talking in the pre-Lost Boys eighties. Nobody got it. In college, I discovered Anne Rice and assumed a safe place for people like me existed, after all, since the Humanities Dept. pretty much sanctioned vampires, right? Wrong again.

By the time my kids were old enough to attend the local parochial elementary school, I had just decided I was going to let my vampire flag fly. Too bad for the kids on Halloween. They could Teenage Mutant Ninja Turtle all they wanted but the lady who ran the PTO Halloween party dressed like a vampire and wouldn't make them feel better by insisting it was a just costume. (I also had cultivated a rich throaty Mu-hahahahaha laugh that made first graders scurry out of the room real fast. It still makes me laugh all these years later. Mu-haha.) In fact, I still say they were lucky I limited it to Halloween. I could have dressed like that every Monday when I ran the school bookstore.

The teachers gave me a lot of side eye and probably thought, Oh well, she's a volunteer. Buy cheap, get cheap.

But that was their anti-Halloween prejudice talking. If only they knew just how Catholic Halloween really was.

Halloween's Nativity
Many people associate Halloween with pagan practices, but that's really not where it all started. In fact, the connection people make between Samhain and Halloween is actually an historically recent development.)

Halloween began way back before the ninth century as an association to All Saint's Day, which Catholics observe on November 1. It is a Holy Day of Obligation which remembers all those who have been blessed in Heaven.

Way back then, they used the word hallow for saint. November 1 was, accordingly, referred to as All Hallows. That made the evening before, October 31, All Hallows Even… or, you guessed it…hallowe'en, for short.

November 2 was celebrated as All Souls Day, a day to remember those in purgatory (a time-out for those souls who hadn't behaved enough to go directly to Heaven.) But what about those not in Heaven or Purgatory? If there is to be a Day of the Damned, it needs to find a different spot on the calendar because one thing's for sure: it's not Halloween.

Oooh, Spooky
What about all the occult aspects of the holiday?

The idea of the occult is Catholic, too, as it's based on our belief in the afterlife. During Hallowtide (October 31-November 2) it's thought that the boundary between the living and the dead was thinned, and ghosts or other communications from the "other side" were more likely to occur. Whether we want to admit it or not, we Catholics are a massively superstitious bunch. Those beliefs may have led to the practice of dressing up like ghoulies on Halloween.

Culture may have grown to associate Halloween with scary, dark, or even evil things but it's really just a way to observe and recognize our own mortality. Consider the Danse Macabre: an ages-old artistic rendering of the truth that beggars and Kings, and all between are united by Death. Danse art decorated cemeteries and churches, and was performed in verse and in dramatic performances. Writings from the fifteenth century proclaimed:

Whether foolish or wise, beggar or king, rich or poor, all are equal in death.

Perhaps modern man lives too lush and comfortable a life to believe we are conquerable by Death. Maybe we all believe we're a little bit immortal. Reminders of the inevitable end are considered an interruption to our lifestyles, a thing to be abhorred.

But let's face it: there is a skeleton walking around inside each and every single one of us. Where is the evil in that? It's just life.

So, to all the holy Hallow-haters, I say: relax. Halloween is an expression of my Catholic faith. I don't need a novena to save me from the dark side, even if I do wish every day was Halloween.

My stories are a reflection of my beliefs. Yes, I write about vampires and demons and the fight between Light and Dark, good and evil. I believe that fight is real, and is present in each of our lives to some degree. But I also explore the element of faith and the hope of redemption. Art imitates life, right?

And, while I may not wear my cape much these days (thanks, pharmacy day job, you party pooper, you) the sweet shadows and macabre poetics will always fill the corners of my heart.

Don't be afraid to let them fill yours, too. 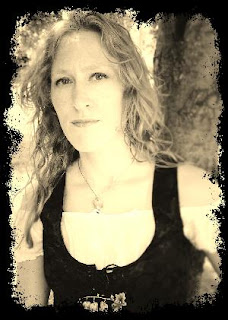 Ash Krafton (@ashkrafton) is an author of speculative fiction. She's an unrepentant Ultimate Sinner who once guest-hosted a radio show on Sirius XM Radio channel Ozzy's Boneyard (and proclaimed Alice Cooper to be "dead sexy.") She also writes urban fantasy and paranormal romance, stories that seek to find redemption for her characters. Vampires, demons, reincarnation…you name it, she writes it. Currently, she's celebrating the release of the first in a new series of magic and mayhem: CHARM CITY (The Demon Whisperer #1) is available on Kindle Unlimited now.

Ash is giving away three print proofs of CHARM CITY (The Demon Whisperer #1), each with a unique handmade charmed bookblade. (She loves the shiny things!) Want to try your luck? Enter now!