Angela's Review: A Chance for Him by Lara Richard 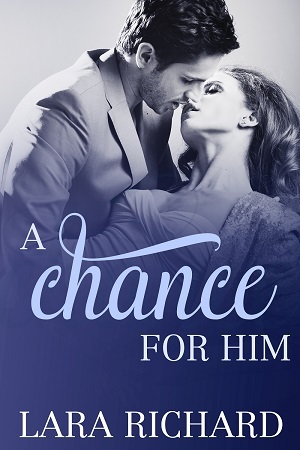 How many chances does life give you to find your HEA?

First impressions ...
Ashley Taylor is a young waitress in Las Vegas when she meets charismatic billionaire Grant Morland. They spend one unforgettable weekend together before Grant’s hectic work life pulls him away.

No sooner has he gone than Ashley is summoned home by a family emergency. Then she learns about Grant’s playboy reputation, and knows better than to think she’ll ever see him again.

Second acts ...
Nine years later, their paths cross again. Grant had tried to contact Ashley soon after their encounter, only to discover she’d left town. Though he couldn’t track her down, he never forgot the sweet, sexy girl who was so different from his usual conquests.

Now that he’s finally found her again, Grant’s determined to pick up where they left off. He doesn’t care that Ashley’s a single mom. But he doesn’t know her secret -- one that would change everything between them.

And last chances ...
Their chemistry is as strong as ever, and Ashley can’t resist him … but can she trust him? Her experience with an abusive ex makes her question her judgment in men. If Grant learns what she’s hiding, will he forgive her?

Love scenes are fully realized in this steamy romance with guaranteed HEA!

A Chance for Him was a lovely second chance romance that will make you swoon over and over. I can say that there are some pretty hot scenes throughout this one. Grant meets Ashley when she is 21, working as a waitress, and trying her best to get over a past she would love to forget. Grant is going through a lot so he isn't ready for something serious. Ashley and Grant have a short fling that stays with each of them long after they are separated. What happens when they reconnect years later? Will they fall into each other's arms or will some secrets tear them apart.

I liked this story. Yeah it's a story line I've read before but it was done with style and grace. I do feel that there was some things that were in the inner monologues that were a little too detailed at times but it didn't take away from my reading experience. There wasn't much drama which is refreshing.

If you are looking for a second chance romance to cuddle up to by the pool or by the fire this would be an excellent choice. I will definitely be reading more from this author.