Juliet and The Initiation by Kailee Reese Samuels Tour & Giveaway 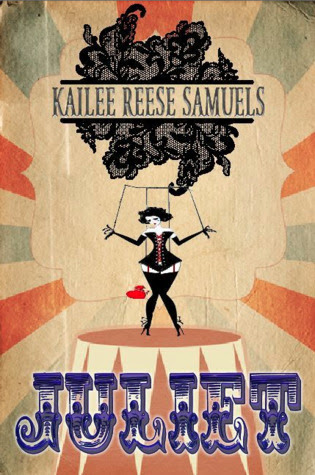 
To have and hold, love and cherish, til death do us part…
When an unexpected twist of fate hands Iris her worst nightmare, the world spins out of control. As she falls apart, Iris finds comfort in her unpredictable behavior. With mysterious clues hidden by her husband, Iris drives away from her life to uncover the world he kept hidden for years.
Small town Sugargrove, Texas is unlike anything Iris has ever experienced. Foreboding, dark, and sensual, the enchanting Juliet academy lures Iris with hopes of discovering who she really is. Making friends and meeting people, she delves into the treacherous world of her surrender. But when she encounters Salvatore Raniero, the sexy alpha male ignites her in unimaginable ways, haunting her every thought and showing her a new kind of high.
As she learns Sal is more than the mischievous sexual provocateur of Juliet, revealing a composed and thoughtful side, Iris wonders what else is hiding behind his mesmerizing ebony, emerald eyes. Pushing her into an even deeper erotic journey, Iris soars with her newfound freedom in the collar.
The secrets unfurl as the web of lies continues to grow, and Iris realizes she is not the girl she once was. Trapped between a lonely past and an unknown future, she is left with the daunting task of deciding what she truly desires and who she wants to obey.
A love story doesn’t always go the way it should, sometimes the path to forever is a twisting, spiraling, and flying ride.
—
JULIET is Kailee Reese Samuels full-length debut novel.
THE INITIATION book 1 is set within the Juliet world and provides further glimpses into Salvatore Raniero’s character and history.
Kailee Reese Samuels writes contemporary, romantic, and suspense, with an erotic flair. Let her words whisk you away, escaping with delicious guys, toe-curling kisses, and addictive stories.
WARNING: This book contains graphic BDSM, strong sexual situations, and explicit language. Contents intended for MATURE readers 18+ ONLY. 
Five years ago, Sal Raniero was a loyal son and responsible friend. Giving everything he had to his family and friends, he was on his way to becoming the man everyone expected. But he harbored a dark secret.
He needed pain…a lot of pain.
With his masochism searing through his veins when the offer is put before him to push his servitude further, he cannot resist. Between praying and playing on his knees, he is confronted with the last thing he expects.
His heart.
Torn between becoming the golden boy of Juliet and just another guy with a fetish streak, he makes a decision that will chart the course for the rest of his life.
Take the journey with him and discover what made the boy into the man.
THE INITIATION is part of Kailee Reese Samuels’ series of novellas. Scenes from Juliet are all new companion books to Juliet. These are not excerpts from Juliet, but further glimpses into the characters, backstory, and behind-the-scenes. While they can standalone, they would be better enjoyed with the preliminary reading of Juliet.

“You’re easy. I want to Master you,” Mack goaded, smirking with his eyes sparkling in an all-knowing manner.
She couldn't help but notice the way in which he said that. He wanted to master her, not physically, but mentally.
“I could seduce you right now, regardless of how you feel about me,” Mack challenged.
Who the fuck does he think he is?
High on her happy from—Sal and Tank—Iris upped the ante. “Try me.”
Walking to the small cabinet, he spoke to her very soul. “People think seduction involves a touch, a kiss, a tangible variable. But it doesn't. Take for instance,” Mack meticulously poured two glasses of whiskey, her nemesis' liquid love. “…Sal.”
Speak of the devil, Sal entered a conversation he had no business being in. Handing her one, Mack held back restrained, cautious to not touch to her skin. His science unconventional, but curious Iris followed.
“Sal seduces you every damned time he sees you, and you do not even justify it. You choose not to play his game,” Mack illustrated. Taking a long sip, Mack closed his eyes as he swallowed. “But you should because he wants you, too.”
“What the hell are you talking about?” Iris questioned, sipping the smooth, rich blend.
His eyes beckoned Iris as he tilted his head down ever so slightly, like a lighthouse in the night. “Every time you see him, you are turned on. And undoubtedly, your mind finds its way back to him as you fuck yourself every night.”
Her curiousness instantly manifested to anger, perhaps that had been his lure all along. Despite what she believed, what she knew, Mack had no right to insinuate these visions about what she did or didn’t do at night under the covers.
“I think it's time for me to leave,” Iris hastened, setting down her glass and starting to get up.
“Sit,” Mack urged, in the gentlest of ways, a simple command. “Tell me I am not right, and I will take you home right now.”
Her mind rushed through the memories of a photo book, counting the times she lusted for Sal, and done exactly what Mack described. Flushed with rage at his ability, Iris attempted to throw him off. “You're wrong,” Iris countered, slamming back the whiskey, “I’ve done it way more than that.”
Mack laughed at her, his eyes lighting up like he had scored a point. Her anger eased and Iris giggled at the brilliant idiocy of it all.
“You aren't going to get to him unless you learn to play his game.”
His lesson became an integral part of the night; the cheat sheet she needed. Iris asked, “Did he tell you to do this?”
“No, we hardly ever speak,” Mack declared, stroking his ginger blonde goatee.
“Okay, fine. Great Wizard, bestow your wisdom upon me and explain, how do I play his game?” Iris sassed, her sarcasm defiant.
“I’ll tell you the biggest secret of them all, after I seduce you,” Mack bragged, raising his eyebrows.
“You owe me the secret, Wizard,” Iris nagged slyly.
Despite the fire igniting between them, Iris didn’t forget his promise. Mack’s lips smirked as he leaned down, kissing her passionately. Iris momentarily thought about going for another round of his game.
“BDSM isn't a win or lose. It's a push, a pull, and a tug-of-war that is won mentally long before anyone comes. If you remember that, you will be on a more even playing field, but you have to play the game. And I assure you Sal's Dominant will come to play.”