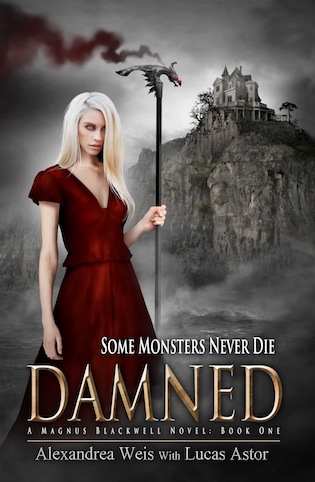 
Over a hundred years after the death of Magnus Blackwell, Altmover Manor sits abandoned.
Lexie Arden and her fiancé, Will Bennet, are determined to rescue the neglected Mount Desert Island landmark. They want to make Altmover Manor their home. But Magnus has other plans.
A spirit bound to his former residence, Magnus finds himself inexplicably drawn to the young woman. She has a supernatural gift; a gift Magnus wants to exploit.
As Lexie and Will settle in, secrets from Magnus’s past begin to surface. Compelled to learn all she can about the former owner, Lexie becomes immersed in a world of voodoo, curses, and the whereabouts of a mysterious dragon cane.
Magnus’s crimes won’t be so easily forgotten, and what Lexie unearths is going to change the future … for everyone.

Lexie changed into her white nightshirt and climbed into bed next to Will. He had his laptop open, going over his plans for the restoration. Lexie reached for the Oscar Wilde letters she’d left on her night table.
While the tapping of Will’s fingers on the computer keys disturbed the silence in the room, she devoured the correspondence between Magnus and Oscar Wilde.
“These two men met in New Orleans. Oscar makes several references in his letters to the time they spent there.”
Will didn’t look away from his laptop.
“Maybe the doll I found came from there,” Lexie went on. “Magnus might have brought the voodoo doll home from his trip.”
Will rolled his finger around on the mouse, rotating the house on the screen. “Most people bring home hurricane glasses as souvenirs. Our guy brought home a voodoo doll. Imagine that.”
With the letter in hand, Lexie sat up in the bed. “Listen to this. I implore you to stay away from O’Connor and his bride. I know your innermost feelings, my friend, and I fear what you may do. What do you think that means? I wonder who O’Connor was.”
“I have no idea,” he mumbled, sounding bored.
“He might be our architect.” Lexie slouched, remembering the grainy photograph she’d found in the attic. “But these letters are dated before the changes to the house in 1890, so it can’t be him.”
He pushed his laptop aside. “How do you know when the changes were made?”
“I found a picture in the attic made during the renovations and dated 1890.”
“Where’s this picture?” His voice dropped, a sure sign of his frustration.
She put down her letter. “The living room. I put it with a collection of old paintings I found.”
“Why don’t you get the picture for me?”
“But …” Lexie hesitated. She feared going into the living room alone at night.
“Lexie, you’d better not say anything about ghosts.”
“I know, Will. I’m not sure I can …”
He took a flashlight from his night table. “Then please get the picture. It might help with my notes.”
She didn’t want to argue. Lexie would rather face a boatload of Magnus Blackwells than have a confrontation with Will. She snatched the flashlight from him and climbed from the bed. After pulling on her fuzzy robe and finding her slippers, she looked at him.
“If I don’t return …” She yanked the door open.
In the hallway, she flipped the switch for the sconces lining the walls. The pale light comforted her but faded as she approached the black staircase. Lexie turned on the flashlight and pointed the beam down the stairs.
She made her way down the white marble-inlaid steps, but as the darkness from the first floor closed in around her, Lexie picked up her pace. When her slippers hit the marble floor, she ran to the light switch controlling the foyer’s lotus sconces. Jogging through the hallway toward the living room, Lexie fought to keep her dread from getting the better of her.
Once the lights in the living room came on, she let out a relieved sigh. The room was the same as she had left it. Paintings sat arranged against the walls, and Magnus Blackwell’s portrait remained where Will and Remi had left it. Eager to retrieve the picture, Lexie went to the pieces she’d brought from the attic and sifted through them.
The desired photograph in hand, she darted for the light switch, and an odd sensation came over her. She froze. Something wasn’t right. She stifled a cry when she discovered Magnus’s painting back above the mantel.
His condescending grin taunted her as if saying, “You can’t get rid of me so easily.”
She ran out of the living room without bothering to turn off the lights. In the hallway, she slapped the foyer light switch and rushed to the stairs.
Lexie trembled as the scales of the dragon undulated. She yanked her hand away from the banister and bounded up the last steps, eager to escape her nightmare.

Alexandrea Weis, PhD, is an award-winning author of twenty-five novels, a screenwriter, ICU Nurse, and historian who was born and raised in the French Quarter of New Orleans. Having grown up in the motion picture industry as the daughter of a director, she learned to tell stories from a different perspective and began writing at the age of eight. Infusing the rich tapestry of her hometown into her novels, she believes that creating vivid characters makes a story moving and memorable. A permitted/certified wildlife rehabber with the Louisiana Wildlife and Fisheries, Weis rescues orphaned and injured animals. She lives with her husband and pets in New Orleans. Weis writes paranormal, suspense, thrillers, horror, crime fiction, and romance. ~Winner of the gold medal from Reader's Favorite Book Awards for Romantic Suspense, the Silver Medal from the Foreword Magazine Book of the Year awards for Romance, the gold medal from the Feathered Quill Book Awards for Romance, and an InD’Tale Magazine RONE winner for Paranormal Romance. Weis is a member of the Horror Writers Association
Lucas Astor is from New York, has resided in Central America and the Middle East, and traveled through Europe. He lives a very private, virtually reclusive lifestyle, preferring to spend time with a close-knit group of friends than be in the spotlight.
He is an author and poet with a penchant for telling stories that delve into the dark side of the human psyche. He likes to explore the evil that exists, not just in the world, but right next door behind a smiling face.
Photography, making wine, and helping endangered species are just some of his interests. Lucas is an expert archer and enjoys jazz, blues, and classical music.
One of his favorite quotes is: “It’s better to be silent than be a fool.” ~Harper Lee (To Kill a Mockingbird)