Series overview:
Cursed in Stone, a Gothic Romance series from Lia Davis and Kerry Adrienne
Constantine De La Fontaine fought in the Third Crusade, certain he was on the side of the righteous. After being wounded in battle, he’s tended to by the beautiful and mysterious Amara, a woman who’s hiding a dangerous secret. She’s the caliph’s daughter, and he’s promised her hand in marriage to the demon who’s made him powerful. Con and Amara’s love is white hot, but forbidden. When the demon finds out about their tryst, he lashes out in a jealous rage, cursing both to live out eternity in their own personal hells.
For centuries, Con lives as a gargoyle, cursed in stone and destined to watch others find love, with no knowledge of Amara’s fate. Able to take human form only during the three nights of the full moon, he wanders the streets of the cities the curse transports him to, lost and broken hearted. Then, a whisper on the wind and a magical pull to a gemstone gives him new hope for breaking his curse and finding out what’s happened to his lost love. A cloaked figure, an ancient tome, and more gemstones slowly begin to help him unravel the mystery of his curse—and possibly his freedom.
This incredible saga unfolds in a series of five novella-length stories, each set a different city around the world. The series begins with Sunstone's Fire, releasing on April 5, 2016, then followed by Opal's Seduction, Amethyst's Imbalance, Sapphire's Star, and wraps up with Emerald's Light on October 11, 2016. Learn more at: CursedInStone.com 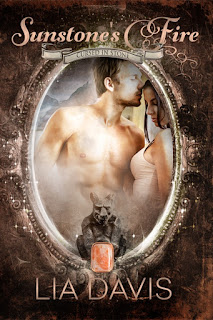 Cursed in Stone, book 1
by Lia Davis
Releases on April 5, 2016
Stripped of fire and passion
The sunstone, and those who possess it, loses all attraction. 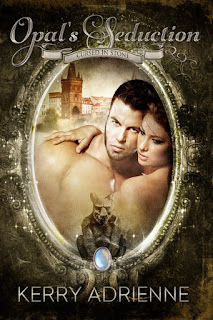 About the Authors
Kerry Adrienne:
Repped by the fabulous Marisa Corvisiero with the Corvisiero Literary Agency. http://www.corvisieroagency.com/
Kerry loves history and spends large amounts of time wondering about people who lived and walked on Earth in the past. She’s a mom to three daughters, six cats, and various small animals. Her husband says she’s a marketer’s dream, as she often believes everything she hears—at least initially. Her shoe horde will attest to her fine shopping skills.
In addition to writing, Kerry loves to sew (costumes and cosplay, especially), draw, paint, make chainmail, and play guitar.
Her new love is her Mini Cooper Convertible, Sheldon, and they have already gone on many adventures. They travel to as many concerts as they can–especially Green Day and Marilyn Manson.
You can visit her much-neglected costuming blog here: http://cloakandcostume.blogspot.com/ Maybe she’ll have time to update it soon.
​
Connect with Kerry: Website | Blog | Facebook | Twitter | Amazon | Goodreads

Lia Davis:
In 2008, Lia Davis ventured into the world of writing and publishing and never looked back. She has published more than twenty books, including the bestselling A Tiger’s Claim, book one in her fan favorite Ashwood Falls series. Her novels feature compassionate yet strong alpha heroes who know how to please their women and her leading ladies are each strong in their own way. No matter what obstacle she throws at them, they come out better in the end.
While writing was initially a way escape from real world drama, Lia now makes her living creating worlds filled with magic, mystery, romance, and adventure so that others can leave real life behind for a few hours at a time.
Lia’s favorite things are spending time with family, traveling, reading, writing, chocolate, coffee, nature and hanging out with her kitties. She and her family live in Northeast Florida battling hurricanes and very humid summers, but it’s her home and she loves it! Sign up for her newsletter, become a member of her fan club, and follow her on Twitter  @NovelsByLia.