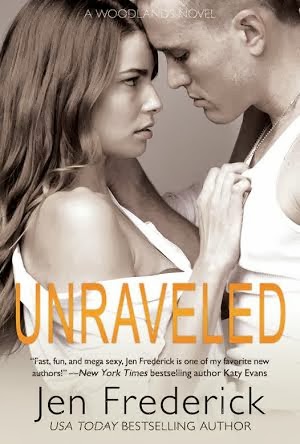 Amazon:  TBD
Barnes & Noble: TBD
Kobo: TBD
Goodreads: https://www.goodreads.com/book/show/18500128-unraveled
RELEASE DATE: January 20th
Blurb
Twenty-five-year-old Sgt. Gray Phillips is at a crossroads in his life: stay in the Marine Corps or get out and learn to be a civilian? He’s got forty-five days of leave to make up his mind but the people in his life aren’t making the decision any easier.  His dad wants him to get out; his grandfather wants him to stay in. And his growing feelings for Sam Anderson are wreaking havoc with his heart…and his mind.  He believes relationships get ruined when a Marine goes on deployment.  So now he’s got an even harder decision to make: take a chance on Sam or leave love behind and give his all to the Marines.
Twenty-two year old Samantha Anderson lost her husband to an IED in Afghanistan just two months after their vows. Two years later, Sam is full of regrets—that she didn't move with her husband to Alaska; that she allowed her friends to drift away; that she hasn't taken many chances in life. Now, she's met Gray and taking a risk on this Marine could be her one opportunity to feel alive and in love again. But how can she risk her heart on another military man who could share the same tragic fate as her husband?

Note: Although these books are part of a series, they do not need to be read in order
********
Sexy Excerpt
His tongue and mouth left mine to leave a hot, wet path from my mouth, across my jaw line, and down to my neck. My leg lifted of its own accord and he took it as a sign to hitch me up higher until both my legs either dangled off the floor or wrapped around him. I chose to wrap my legs around him and was rewarded with a thick hard column pressing into my sex. We both groaned at the contact and I could feel his sound against my neck. The reverberations sent minor shocks throughout my nervous system. Holding me up against the wall, he began thrusting against me rhythmically, every impact of his hips making me hotter and wetter than I remembered I could get.

I gripped him tighter with my legs and dug my hands into his hair, using every bit of his body as leverage. He held me up with ease, as if I were a feather. One hand was under my right butt cheek and the other was exploring my left side, pulling out my T-shirt, only to find the tank underneath. Needing his mouth back, I tugged on his hair and he took the hint immediately. He fastened his lips over mine and we devoured each other, still rubbing our lower bodies against each other as the bass from the dance floor pounded the floor boards.

Whimpering, I begged in moans and small cries for more. A familiar but almost forgotten tension was winding its way from between my legs outward. All thoughts of storage rooms and hallways and strangers were lost in a swirl of bright lights that were bursting behind my eyelids.

“I got you, baby,” he growled against my mouth. “Just let go.” And so I did. I closed my eyes and let those long dormant feelings wash over me, spreading from the inside of my legs to the nerve endings in my toes and fingertips and the very top of my head. All the while, he kept grinding and grinding and grinding against me, whispering in my ear how I was the hottest thing he’d ever held, how he couldn’t wait to taste, how he’d die if he couldn’t be inside me tonight.


For four years, Grace Sullivan wrote to a Marine she never met, and fell in love. But when his deployment ended, so did the letters. Ever since that day, Grace has been coasting, academically and emotionally. The one thing she’s decided? No way is Noah Jackson — or any man — ever going to break her heart again.

Noah has always known exactly what he wants out of life. Success. Stability. Control. That’s why he joined the Marines and that’s why he’s fighting his way — literally — through college. Now that he’s got the rest of his life on track, he has one last conquest: Grace Sullivan. But since he was the one who stopped writing, he knows that winning her back will be his biggest battle yet.

Whore. Slut. Typhoid Mary.
I've been called all these at Central College. One drunken night, one act of irresponsible behavior, and my reputation was ruined. Guys labeled me as easy and girls shied away. To cope, I stayed away from Central social life and away from Central men, so why is it that my new biology lab partner is so irresistible to me?

He's everything I shouldn't want. A former Marine involved in illegal fighting with a quick trigger temper and an easy smile for all the women. His fists aren't the danger to me, though, it's his charm. He's sliding his way into my heart and I'm afraid that he's going to be the one to break me.

Impulsive. Unthinking. Hot tempered.
I allow instinct to rule my behavior. If it feels good, do it, has been my motto because if I spend too much time thinking, I'll begin to remember exactly where I came from. At Central College, I've got fighting and I've got women and I thought I was satisfied until I met her.

She's everything I didn't realize I wanted and the more time I spend with her, the more I want her. But she's been hurt too much in the past and I don't want to be the one to break her. I know I should walk away, but I just can't.

Bonus Content: Upon reaching the USA Today Bestselling milestone, I wrote a 10,000 word epilogue as a thank you to the readers who loved and supported Unspoken.  I posted it for free on my blog but at the urging of readers, I have added it to the original version.

Jen Frederick lives with her husband, child, and one rambunctious dog.  She's been reading stories all her life but never imagined writing one of her own. Jen loves to hear from readers so drop her a line at jen@jenfrederick.com.


$200 GC to retailer of your choice
Full set of Woodlands print books (5) with dog tags.