I love summer because that usually means I have time to attend conventions and meet with readers. This summer I’m making appearances at several events but I’m really excited about Authors After Dark in Savannah from August 3 to 7. If you’re on the fence about this one, please let me sway you to the (After) Dark Side. It looks like it’s shaping up to be an awesome week and it’s a real steal as far as cons go.


As for me, this will be my first time attending this convention and I’m really looking forward to it. AAD sounds like an absolutely awesome event and I just love Savannah. (By the way, If you’re looking for more stuff to do in the area, I’d recommend Savannah Smiles. It’s a dueling piano bar not far from the convention hotel, and I just love it!)

I’ll be in town for AAD from Wednesday to Sunday (August 3-7) and I have a couple of special things planned. I’ll pop in to other events as well, but these are guaranteed times when you can get to know me. On Friday I will be sponsoring breakfast from 8:30 to 9:30 with several other awesome authors. From 11 a.m. to noon, I’ll be in the Q&A room hosting a fun game where you can get to know my wicked sense of humor. And of course, I’ll be at the book signing on Saturday. I look forward to meeting everyone and having some fun.
In the meantime, I’d love to introduce you to my work. I write LGBTQ-focused romance that tends to focus on characters learning to be true to themselves. My latest release, In the Present Tense, is about a young man named Miles who has an unusual dissociative disorder that causes him to time travel. Miles’s journey involves trying to reconnect with a past love and find a cure for his rare condition. This is a book that will appeal to fans of paranormal and sci-fi as well as those who love a good suspenseful story.
My debut, Designs On You, is an M/M romance reminiscent of When Harry Met Sally. What can I say? I’m a fan of the Friends to Lovers trope.
Read on to find out more about each book and I hope to see you at Authors After Dark! 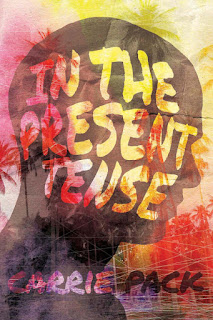 IN THE PRESENT TENSE:
Miles Lawson goes to sleep dreaming of a future with his boyfriend Adam, but wakes to find he is married to Ana, an acquaintance from high school. When he learns he has been time traveling, Miles is consumed with finding a cure for his rare condition—and finding his first love. But will he be able to convince Adam he is telling the truth before it’s too late?

EXCERPT:
Miles sat there and tried to make out shapes and colors in the dark room as he searched his brain for a memory of anything.
Nothing looked familiar. His desk, his drum set, the sheets—all gone. Not one thing looked the way it had when he’d fallen asleep, and Ana certainly hadn’t been in his bed.
He tried to replay the previous day’s events, but everything seemed fuzzy, like a fogged bathroom mirror that he couldn’t wipe clean.

Why was everything so fuzzy?

Last night… What happened last night?
Adam had come over and they were watching TV together, and Adam had given him a small stuffed giraffe because Miles was scared about having surgery. He reached for his left arm, expecting to find the cast that had been there for the last two months, but it wasn’t there. His heart began to beat so loudly he glanced over at Ana to make sure she was still asleep.
Unable to determine what had happened to his cast, Miles resumed his tally of the previous evening’s chain of events. At around ten-thirty, his mom said Adam had to leave because they had to get up early to go to the hospital. He had taken his pain meds and gone to sleep with the phantom of Adam’s goodnight kiss on his cheek. He’d been happy.
He’d gotten a text from Ana earlier in the evening, but she was only wishing him luck with the surgery. She hadn’t come over. In fact, as far as Miles knew, Ana had been several hours away in her dorm room.
So how had she gotten into his bedroom? And who had changed his sheets?
He threw off the covers and stood up, noticing he was only wearing a tight-fitting pair of boxer briefs instead of his usual basketball shorts.
He looked around the room for anything familiar, but it was still dark out, and all he could see were shadows and vague shapes. On the dresser opposite the bed, he found a few framed photos. Squinting to see without turning on a light, Miles studied the images carefully.
As his eyes focused, he recognized a couple of the photos. One was from last year’s prom: Adam wearing that ridiculous corsage Miles had bought him, Ana being dipped by her date, David, as all four of them smiled widely in front of a cheesy faux tropical scene. One of the frames held a collage of photos of his and Ana’s friends. He recognized Adam, Lucky, Antonio, Dahlia and Brienne. But the last one, the largest of all the photos, was of him and Ana—her in a flowing white dress and him in a black suit, both wearing broad smiles and flanked by Miles’s parents and a woman Miles had only seen once: Julia Espinosa, Ana’s mother.
A loud clatter echoed through the bedroom as the frame hit the edge of the dresser and fell to the hardwood floor. This wasn’t his room, and he didn’t remember that photo being taken.
"Go back to sleep," Ana mumbled, her voice muffled by the pillow.
"Ana," he whispered, risking her full anger, but unable to stop himself, "we’re married."
"Thanks for the update. Now go back to sleep before I divorce your dumb ass."
He dropped to the floor on his knees, barely even noticing the sharp pain of bare skin hitting the hard surface.

What the hell had happened?
BUY LINKS: 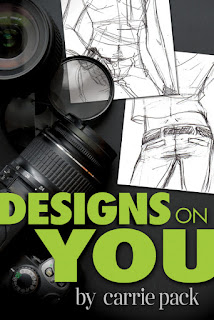 DESIGNS ON YOU:
If graphic designer Scott Parker has to design one more cupcake company logo, he might lose it. So when tasked with retouching photos for a big fashion client, a stunning, lanky model mesmerizes Scott and occupies his fantasies long after the assignment is finished. When the model is assigned to one of Scott’s projects, Scott discovers that the object of his desire is nothing like what he imagined. Despite Jamie Donovan’s aloof and dismissive behavior, Scott struggles to forge a friendship with him, all the while trying to keep his attraction at bay. Will Jamie follow through on signals that he may be interested, or will he forever be the beautiful man in the photograph, an untouchable fantasy?
Download a free chapter!

ABOUT ME:
Carrie is the author of two novels—Designs On You and In the Present Tense—and a part-time college professor. She recently left her job in marketing to actively pursue her writing career. Her early career focused on advertising, journalism, and public relations while she also did freelance writing for businesses in the nonprofit sector. Carrie lives in Florida, which she fondly calls America’s Wang, with her husband and four cats. 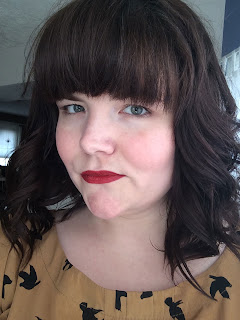 Email ThisBlogThis!Share to TwitterShare to FacebookShare to Pinterest
Labels: All Things Paranormal and Romance, author spotlight, Authors After Dark