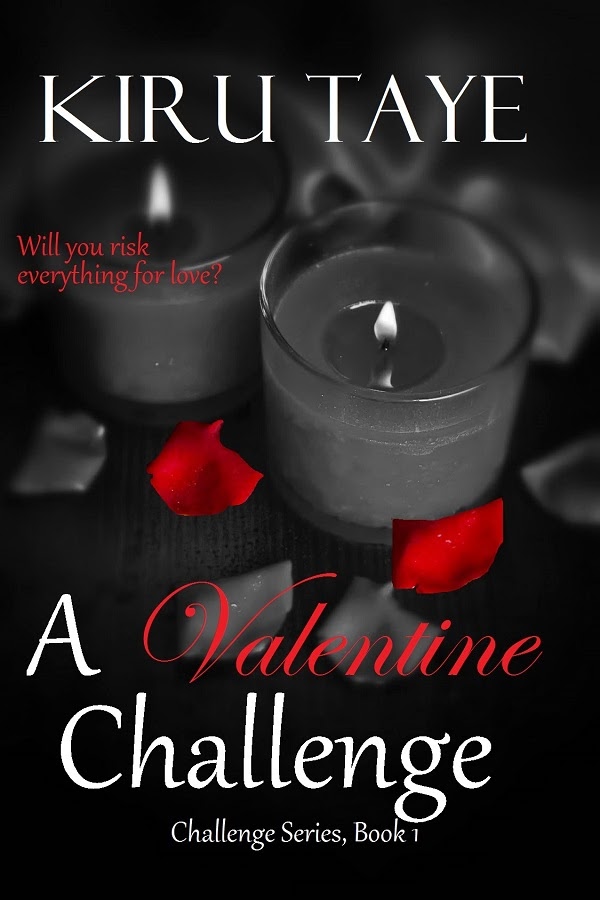 A Valentine Challenge
by
Kiru Taye

Challenge Series – Three friends. Three challenges. Are they willing to risk everything for love? Book 1 – A Valentine Challenge
Life is good for ex-soldier turned entrepreneur Michael Ede. Or so he thinks. When his friends set him a challenge to exorcise the memory of a woman from his past, he expects it to be a walk in the park. Socialite Kasie Bosa is spitting fire at men. Her long-term boyfriend has asked for a break via text message of all things. Fuming, she’s told him to go take a dive off the nearest bridge. So the next man who crosses her path is at risk of being shredded with her spa manicured nails. Bad news for Michael who has chosen her as the object of his challenge. But neither of them can deny the sizzling chemistry between them nor control their responses, it seems. It’s the season of love. Will they escape unscathed?

I love those who can smile in trouble, who can gather strength from distress and grow brave by reflection. ~ Leonardo Da Vinci.

Trouble. He could spot it a mile away.

A man accustomed to dealing with danger in all guises, he'd come across its varied forms from the killing fields of Sierra Leone to the marshy jungle of the Niger Delta. Danger came in the form of men with machetes or AK47s and explosives packed into cars in crowded markets. Though scarred, he'd dealt with trouble and survived.

Yet, standing outside the front entrance of Park Hotel, Enugu, the light morning breeze fanning Michael Ede's face, his gut twisted with the awareness of a different kind of trouble.
Today, danger was disguised as a woman. A stunningly beautiful woman.

Sure, she had the poise and elegance of a well-bred lady. A white shirt and high-waist black trouser suit enhanced as well as hid a curvaceous figure in silk swatches, feet encased in black shiny leather peep-toe high-heeled pumps, jet-black hair pulled back in a chignon, blood-red lips  matched her toe nails, she exuded sophistication and class.

Perhaps it was the way she avoided eye contact or the vicelike grip she had on the Louis Vuitton satchel she clutched in her left hand, but some vulnerability seeped out of the exterior shell of elegance and connected with a part of him—the part currently buried under the rubble of a demolished heart. A flame ignited in his gut, licking his skin with hot yearning.

Danger signals resounded within his head, veins churning with rising adrenaline, all his attention focused on the object coming toward him, a sixty-kilogram missile made of flesh and bones.

Get out of here!

Ignoring the screeching warning, he stood his ground. A born fighter, he was no yellow feathered bird ready to take flight at the flicker of a storm. He never ran from danger.

Sashaying toward him, lips in a glorious pout, eyes amber-brown and captivating, she came to a halt more than two long strides away from him.

Did she know, if she came any closer he might not be able to keep his hands off her? He wanted to touch her caramel skin. Slide his tongue along the curve of her collarbone. Would she taste as delightful as the sweet?

Squeeze. Release. He curled fingers into his palms and unclenched them at his sides; the sound of his pounding heart rivalled the drumbeats heralding Obiagu masquerades.

Hot blood scorched his veins, his body ablaze with desire.  It had nothing to do with the early morning sun burning his back.

And everything to do with the woman standing before him. Trouble!

A lover of books, as a teenager Kiru Taye used to read novels under the blanket during lights-outs in boarding school. These days, with a young family to take care of, she's still sacrificing sleep for the pleasures of a good book.

During the day though, she transforms her wildly vivid imagination into sensual, atmospheric romance stories with passionate characters.
When she’s not writing or reading, she'd hanging out with family and friends or travelling. Born in Nigeria, she currently lives in the UK with husband and children.

Follow her blog for latest news and giveaways: http://kirutayewrites.blogspot.com

Amazon US | Amazon UK | All Romance eBooks | Barnes and Noble

Add to your Goodreads TBR