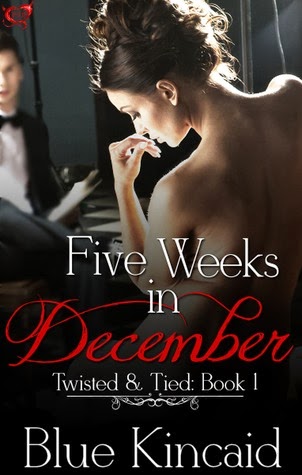 Two years ago tragedy took Harry Everett's confidence as a man and as a Dom. And while he's managed to continue to live his life, what he hasn't been able to do is venture back into the lifestyle that used to be as much a part of him as breathing. The trust he once had in his instincts is broken and for the first time in his life, this alpha man is lost and without answers. So when a friend suggests perhaps a professional submissive could help him, Harry's reluctantly willing to try. He doesn't hold out much hope, though. Until she shows up on his doorstep and turns everything upside down.

A professional submissive for the past seven years, December doesn't belong to any one master. And she likes it that way. But when her best friend’s Dom asks December to help his friend, she can't resist the chance to really do some good. Here's a man who doesn't just want someone to flog - he needs what she can provide and December is determined to help. She's prepared for this to be tough, but what she's not prepared for is how Harry makes her feel. It’s obvious from the beginning that he’s not like any other client and this is not just a job – for either of them.

She’s got five weeks to help him heal.

I received Five Weeks in December as an ARC through NetGalley.

I found that there could have been a bit more information on each of their backstories, but what was there is understandable. There was very little drama, but is this book I didn’t want drama.

I look forward to the next book in the series.

WHO IS BLUE KINCAID?

Blue grew up in the Wild West, the rebellious, stereotypical middle child. She still is! Rebellious that is. Blue's anything but stereotypical. She knew early on that not only was writing her passion - it was also the thing she wanted to devote her life to.

She currently lives in the nation’s capital with her partner of 7 years and two super adorable cats - all three are incredibly sweet rescues. Just kidding. One of the cats is an asshole.

When not writing (which is hardly ever) she devours documentaries about anything and everything, no matter how obscure, and obsesses over all things Food Network and The Walking Dead (well, really she just likes to look at Norman Reedus)
Website
Goodreads
Twitter
Facebook
Posted by Alisa Jenkins at 8:30 AM