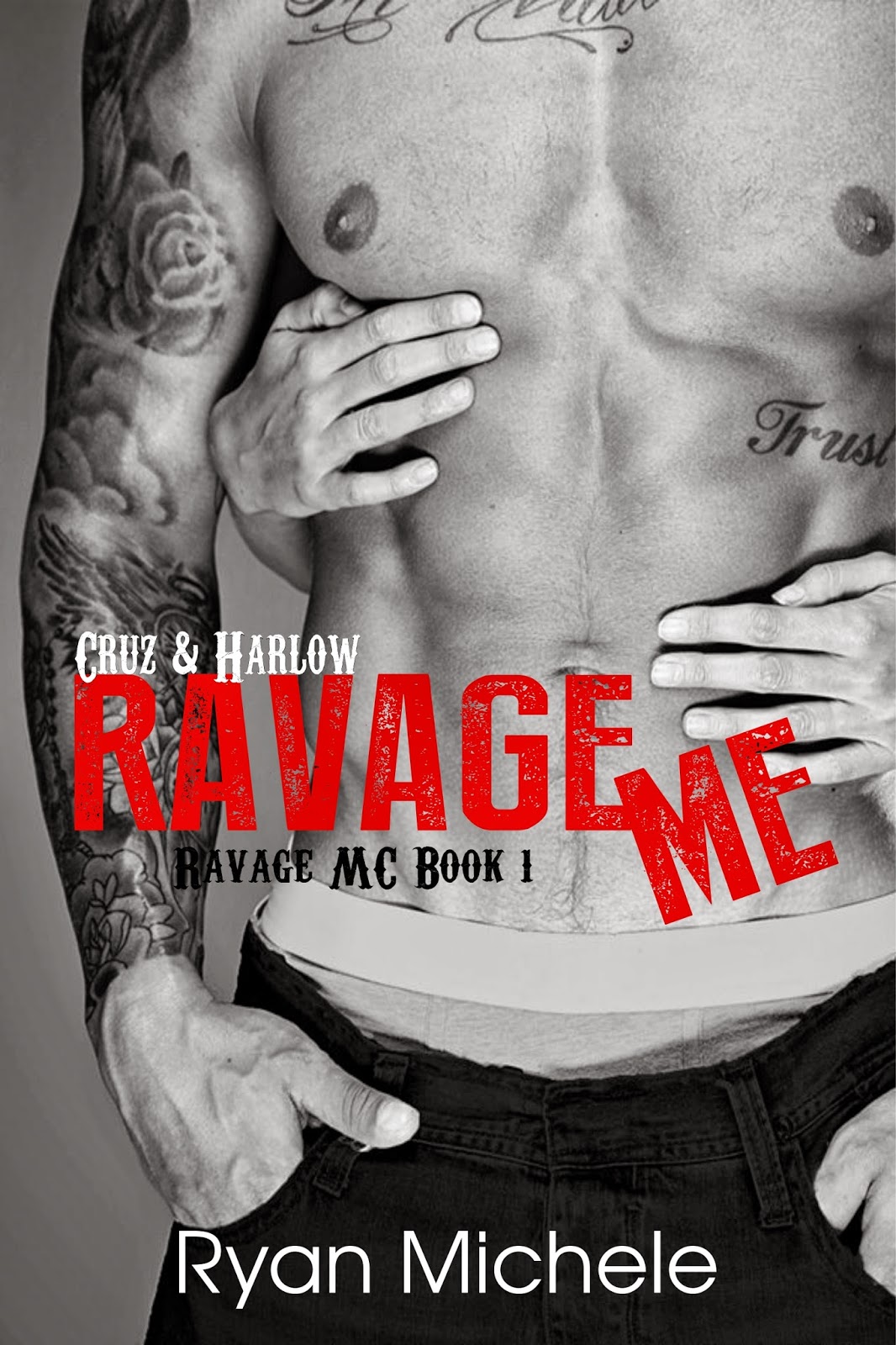 After spending the last two years stuck behind bars for a crime she didn’t commit, Harlow ‘Princess’ Gavelson’s time inside has finally come to an end, and she’s ready for revenge. Unfortunately, being the daughter to the Vice President of the Ravage Motorcycle Club cuts into her plans, as orders must be followed. Trying to settle back into this life is proving difficult when the tables are turned and the woman who framed her is out for blood. Lucky for Princess, growing up in a MC has taught her how to hold her own.After spending years in hell overseas, Donavon ‘Cruz’ came home to lose the very thing he went into hell for, sending him to the darkest moments of his life. Joining Ravage two years ago was his safe haven, and he protects his family at all costs. When a dark-haired bombshell struts into the club’s shop, he’s caught off guard but immediately knows she’s the one he’d do anything for. Tough as nails, and taking no crap from anyone, he’s captivated by a woman who could handle this life. Trying to meet the needs of the MC business and follow his heart proves to be difficult when the two collide, and lives are at stake. Can these two find a way to be together, or will the needs of Ravage cost them everything, including their lives?*Contains mature content including, sex and violence. Mature audiences only.*

Ryan Michele’s a mom and wife who works full time. She lives in the Midwest and enjoys being outside when the weather’s nice. She even helps out in the corn field when it’s necessary.

Ryan Michele has a huge obsession with reading, which only came to life after her best friend said she had to read Twilight. After reading that series, her entire world changed in the blink of an eye. Not only was she sucked into new worlds and all of the wonderful words authors put down on paper, she felt the urge to begin to write down the characters that played inside of her head. In doing so, Safe was born.  Then Wanting You and currently Ravage Me.

“Sugar, you just stirred up a shit storm.” The southern drawl to his voice mixed with the smell of leather, cigarettes, and radiating testosterone would have made my pussy clench, but he ruined that by pressing a damn gun to my head.
“Low, don’t.” I ignored Casey just as I always did. Quickly, I turned my body. As my arm reached back to knock the gun out of his hand, I instantly froze. The three patch rag falling on his chest was a red light flashing in my eyes. Immediately, I stopped, putting my hands in front of me. I would never touch a brother, outside of the ring that is.
The man standing in front of me caught my breath and short-circuited my senses. His broad shoulders were covered with a skin-tight, black t-shirt and leather rag adorned with several patches that fit him like a glove. His bulging arms were covered in tattoos from the wrist up. They were flexed, one pointed the gun with precision, and the other was fisted at his side. His light caramel hair was cut short on the sides, but longer on the top, begging for a woman’s fingers to run through it. His beard was cut very short to his skin making my mouth water, wondering what it would feel like between my thighs. His sapphire eyes narrowed at me as I stared effortlessly in them, becoming entranced unable to speak.
“What the fuck is going on here?” Breaking from this man’s stare, I focused on the familiar voice I’ve missed for too long. Pops eyes swept the room quickly, and when his eyes landed on mine, the anger in them instantly faded. “What the hell’s going on?” He eyed the man with the gun pointed directly at my head and he clenched his hands into fists.
“Hey, Pops,” I said, turning my eyes back to the beautiful specimen in front of me, wanting him to know that I wasn’t afraid. If I needed a bullet in my head, so be it. I wouldn’t shy away.
“You know this bitch?” the hot asshole in front of me clipped, and my lip curled slowly. If he wasn’t wearing that rag, I’d show him how much of a bitch I could be.
“Put the damn gun down, Cruz,” Pops said jokingly. The anger dripping off this man’s face in front of me told me he didn’t see anything funny about this. He began to take a step closer. “Cruz. Stop!” Pops barked loudly as the other guys started walking up behind him. Cruz instantly stopped, but kept the gun on me. “Cruz, this is my daughter, Princess.”
“Shit. Are you fucking kidding me?” Cruz’s anger was actually pretty funny, and I had to stifle the small laugh that wanted to escape. I had too much respect to let it fly. But the shocked look on his face was pretty priceless coming from a tattooed hot-ass. I probably should have told him that sooner, but what can I say … I was born a bitch.
“No, I’m not fucking kidding you. Get the fuck away from her, and put the goddamn gun down.” Moving my head to Pops, I could see he was fuming. Whenever Pops was mad, his forehead turned bright red, and the lines throughout it became more prominent along with the vein that ticked with this heartbeat. It’s a look I always hated growing up, and it used to scare the ever-loving shit out of me.
My eyes flicked back while Cruz took one more look at me. “If you’re still pissed later, we can meet in the ring.” I smiled my damnedest. I could see the smoke threatening to come out of his ears. Confusion laced his eyes, but I wasn’t about to explain right now. I held out my hand to Cruz, “Nice to meet ya. I’m Harlow.” He stared me down as if he was hoping he could make me combust into a million pieces. Sorry Buddy, your super powers won’t work. I’ve been here too long to let that get me.
He tentatively lowered the gun, putting it behind his back, bringing his hand to mine. My hand slipped into his warm, rough, strong grip, a shock raced through my body, beginning at my connected hand and racing all the way through to my feet setting my body on fire. “Cruz.”

Let me start off by saying this book was badass!!! I loved it. I have read a lot of biker books over the past year and this one would go into my top 3. Harlow aka Princess is one of the best leading ladies I have ever read. She is strong, hardcore protective, and she doesn’t take anyone’s shit. She has all the respect for her MC and they respect her back. Princess has one rule that she follows and has never broken; never have sex with a brother. When she meets Cruz, that one rule flies out the window. Cruz is a new brother that joined the MC while Princess was in prison. Will Cruz convince Princess to give up her no brother rule? Will Princess allow herself to become an ol’ lady to Cruz? Will Princess be able to accept Cooper, Cruz’s little boy?
This book kicked ass. The writing was awesome, the plot line went down a different path than any other biker book I have read, and the hero and heroine were great leading characters. I also enjoyed getting to know the other side characters.  I don’t think I can come up with one negative remark to say about this book other than the words the end. I wanted to keep reading. I know the story is continuing with G.T and Casey so that makes me excited.
If you love reading books about badass bikers and their badass bitches, then this book is for you!! If you like reading about a woman who can kick male or female ass, this book is for you. If you like hot sex scenes with a take charge biker, this book is for you. I look forward to reading Seduce Me coming soon in 2014.
I received Ravage Me as an ARC in exchange for my honest review.

Posted by Alisa Jenkins at 2:00 AM