Review: With This Curse by Amanda DeWees 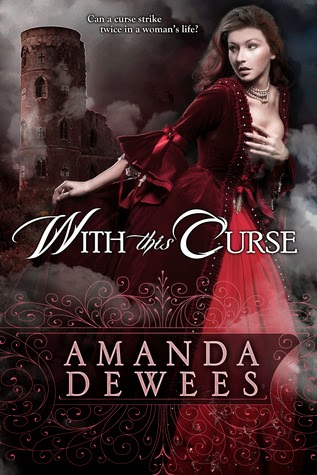 Can a curse strike twice in a woman's life?


I was a seventeen-year-old chambermaid in 1854 when I was
dismissed from Gravesend Hall for having fallen in love with Richard Blackwood,
the younger son of the house. Alone in the world, I found a tenuous position as
a seamstress, but I blamed the Gravesend curse for the disaster that had
befallen me--and for Richard's death soon after in the Crimean War.

Now more than eighteen years have passed, and
Richard's twin,
Atticus, has sought me out with a strange proposal: if I will marry him
and
live with him as his wife in name only to ease the mind of his dying
father,
Atticus will then endow me with a comfortable income for the rest of my
life. I
know that he is not disclosing his true motives, but with no remaining
options for an independent life, I have no choice but to become
Atticus's
wife.


A deception...
Returning
to Gravesend as a bride brings a sense of triumph... but also great unease. Not only
must I pretend to be a wellborn lady and devoted wife to a man whose face is a
constant reminder of the love I lost, but ominous portents whisper that this
masquerade brings grave danger. "This house will take from you what you most
treasure," my mother once warned me. But the curse has already taken the man I
loved. Will it now demand my life?

Learn how Clara's thrilling story unfolds in With This Curse, the addictive new Victorian romantic suspense novel by Amanda DeWees. Readers who enjoyed DeWees's acclaimed gothic romance novel Sea of Secrets,
as well as those who love traditional gothic romance and clean romance
alike, will be captivated by this strong yet vulnerable new heroine and
her suspenseful journey through the perils of heartbreak, danger, and
love. From the theater world of
Victorian London to the austere beauty of a Cornwall manor house,
Clara's
adventure takes her into the most dangerous territory of all: her own
heart.

This is a hard review to write.
I liked many things about the book, but there were a few things I disliked as well.
At one point, I felt it was a lot of rambling.  But I know there were a lot of details needed to make the reader understand the story.
I felt the injustice of Clara being sent away from Gravesend, and the injustice of her own mother not believing her and at least making a small stand in her honor.  The loneliness she felt on her own at the young age (young to us now, but an adult in that period of time).  I am proud of the woman she became and the path(s) she choose when she could have done much much worse.
Strange that Atticus choose her, and tracked her down as he did. I do love the nickname of Atlas, it really does suit him.
Lord Telford, was strange, almost demented in his old age.  His creepy collection, well I don't know how Clara sat with him and visited.  Although, after a few visits we don't hear if they continued or not.
Clara was perfect as lady of the manor, she was fair to the servants- because she knew what it was like.
So spooky occurances did happen, but not to the point the reader would be scared witless.
Genevieve, she was quite annoying to me most of the time.  I felt she acted way younger than her 17 years when she first arrived at Gravesend and continued for sometime. There were times though she did seem and talk much older. I felt along with Clara, at first that there was something strange between Genevieve and Atticus and it seemed wrong.  But we do get clarity on that issue.
I do wish I knew more of what was whispered and fought about between Atticus and Lord Telford.  Other than the surprise we get at the end.  I feel there was much more to it, and more to it than Lord Telford knowing of Clara's true origins.

*Ms. DeWees has also put Discussion Questions at the end of the book.
I was given a copy of this book in exchange for an honest review. 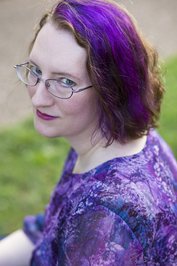 Amanda DeWees is an author and editor based in Atlanta, Georgia. She received her PhD in English literature from the University of Georgia and likes to startle people by announcing that her dissertation topic was vampire literature. Besides writing, her passions include theater, classic film, Ioan Gruffudd, costume design, and the preservation of apostrophes in their natural habitat.
Amanda's books include the widely praised historical gothic romance Sea of Secrets, winner of the 2012 RONE award in mystery, and the Ash Grove Chronicles, a captivating young adult "paranormal lite" romance series set in modern-day North Carolina.
Goodreads
Amazon Author Page
Website
Facebook
Twitter:  @AmandaDeWees.
Posted by Alisa Jenkins at 11:27 PM