Mark My Words by Addison Kline 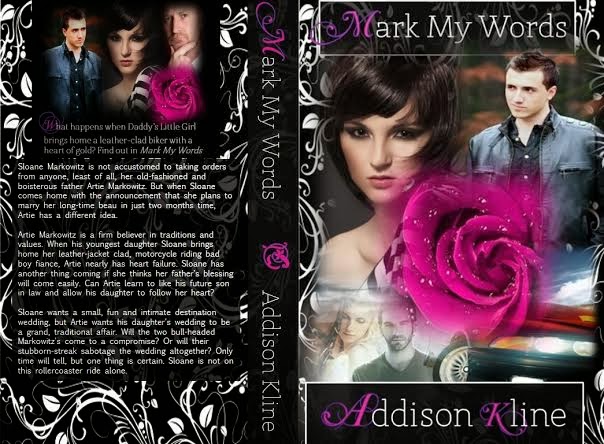 Sloane Markowitz is not accustomed to taking orders from anyone, least of all, her old-fashioned and boisterous father Artie Markowitz. But when Sloane comes home with the announcement that she plans to marry her long-time beau in just two months time, Artie has a different idea. Artie Markowitz is a firm believer in traditions and values. When his youngest daughter Sloane brings home her leather-jacket clad, motorcycle riding bad boy fiance, Artie nearly has heart failure. Sloane has another thing coming if she thinks her father's blessing will come easily. Can Artie learn to like his future son in law and allow his daughter to follow her heart? Sloane wants a small, fun and intimate destination wedding, but Artie wants his daughter's wedding to be a grand, traditional affair. Will the two bull-headed Markowitz's come to a compromise? Or will their stubborn-streak sabotage the wedding altogether? Only time will tell, but one thing is certain. Sloane is not on this roller coaster ride alone.