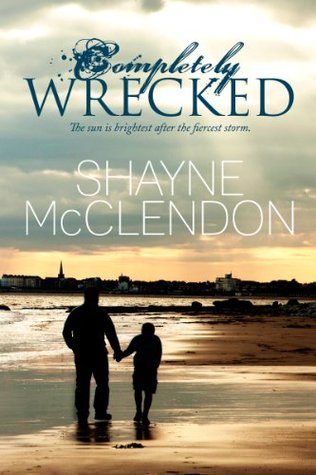 The sun is brightest after the fiercest storm.

Elizabeth Clayton has been in love with Dylan Lange since they were in elementary school. Uncomfortable in her own skin and in possession of a kind and gentle heart, she never expects him to see her in a romantic light.

When she stumbles upon him, battered and unconscious, it starts a chain reaction that will span more than a decade of interactions between them filled with pain, devotion, love, and loss.

Take a journey with Lizzy and Dylan that will make you laugh, make you ugly cry, and (hopefully) encourage you to take a look around and appreciate the love and positivity in your own life.

Trigger warning - two of the characters in this novel survive extreme abuse. Their ordeal is not depicted in graphic detail nor is it considered a positive aspect of the story. However, it is crucial to the plot.

This is my 5 star review for Completely Wrecked by Shayne McClendon.

Completely Wrecked is the highly emotional love story between Elizabeth Clayton and Dylan Lange. Elizabeth has such a beautiful soul. She is kind, caring, and a one of a kind gem. She is just as beautiful on the outside but she has a hard time seeing it. She suffers through years of bullying and torment. When she decides enough is enough, she changes her physical appearance while keeping her inner issues on the back burner. When she was 10 years old Dylan Lange catches her eye, but she doesn’t think that someone as beautiful as he is will ever give her the time of day. She knows that Dylan is troubled but just how far down has Dylan become?

Dylan is broken; he is so broken that he doesn’t feel he can ever be fixed. Yes he is handsome but they daily struggles that he lives through are too much for him to care about how he looks. He has to save his sister and will go through anything and I do mean anything to make sure she is safe. Dylan has watched Lizzy for years, but has always known that is isn’t good enough for her. She is so sweet and innocent he can never taint her with his battered soul. What will happen when Lizzy saves him one night in the park? Will Dylan ever be able to overcome his past to have a future with the one woman he has always loved?

I really enjoyed reading Lizzy and Dylan’s story. I devoured this in one afternoon. I couldn’t seem to leave my computer screen for very long. I never seen the story leading down the path that it did. I can’t imagine what Lilly and Dylan went through but I am glad Shayne told their story. Gram, Riley, Donovan, Davis and RJ were pretty special characters as well. I would recommend the story to anyone who isn’t scared to shed some tears, because I needed quite a few while reading this one!