Review:The Illicit Love of a Courtesan by Jane Lark 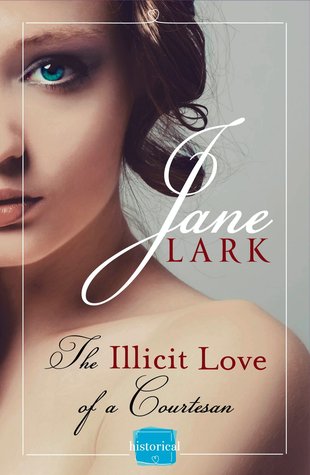 Trapped under the reign of a cruel keeper, Ellen Harding longs to be free. Under his oppression, her soul and conscience have died while her body lives on, fulfilling his dissolute desires. She is empty—a vessel—deaf to the voice of morality and blind to shame.

When her eyes are drawn to a beautiful man for no other reason than his looks, she imagines what it would be like to escape her chains for a night by giving her body to him.

But Edward Marlow is kind and gentle when he touches her, and her subconscious whispers, this man could be her salvation. Yet how can he help her when she has secrets which prevent her freedom?

Edward is restless, lonely, and a little angry with his lot in life—it is his only excuse for being drawn to another man’s mistress. The woman’s dark hair and pale eyes are striking, and he cannot take his gaze off her while she watches him over the top of a fan with an illicit intent in her eyes.

Once he’s known her, he cannot forget her, and once he’s seen the evidence of her supposed benefactor’s brutality, he wants to help her. But how can he when she will not run any more than she will speak of her past?

When a desperate Ellen finally relents and shocks Edward from his sleep, he doesn’t hesitate, he helps her flee. He just doesn’t know he’s running headlong into the secrets of her past.

Ah....Ellen and Edward. Every moment of this historical tale had my attention. You rooted for Edward to save Ellen, to somehow get her away from the life she felt she had no choice but to lead. Then as all the twists and turns in this story started to get spun you were left speechless as how it all started. There is no way to not give away this books story so I won't go into details. Just know that the characters are good and strong. There is no childish drama, it's historical and well kept with the time it is supposed to of happened in, and there is always something happening to keep you interested in the book. I don't give 5 stars freely, I have to be impressed and I was with both of the books in this series! Bravo Jane Lark!!! LOVED them!!

Jane is a writer of authentic, passionate and emotional Historical and New Adult Romance, and a Kindle top 25 bestselling author.

She began her first historical novel at sixteen, but a life full of adversity derailed her as she lives with the restrictions of Ankylosing Spondylitis.

When she finally completed a novel it was because she was determined not to reach forty still saying, I want to write.

Now Jane is writing a Regency series and contemporary, new adult, stories and she is thrilled to be giving her characters life in others' imaginations at last.

You might think that Jane was inspired to write by Jane Austen, especially as she lives near Bath in the United Kingdom, but you would be wrong. Jane's favourite author is Anya Seton, and the book which drew her into the bliss of falling into historical imagination was 'Katherine' a story crafted from reality.

Jane has drawn on this inspiration to discover other real-life love stories, reading memoirs and letters to capture elements of the past, and she uses them to create more realistic plots.

'Basically I love history and I am sucker for a love story. I love the feeling of falling in love; it's wonderful being able to do it time and time again in fiction.'

Jane is also a Chartered Member of the Institute of Personnel and Development in the United Kingdom, and uses this specialist understanding of people to bring her characters to life.

Posted by Alisa Jenkins at 3:55 PM