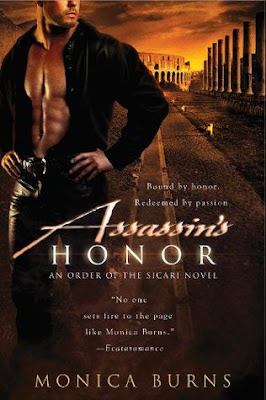 A sexy new adventure-packed romance with a paranormal twist-from the award-winning author.

Archeologist Emma Zale sees the past when she touches relics. It's how she uncovered evidence of an ancient order of assassins-the Sicari. When a sinfully dark stranger shows up on her Chicago doorstep demanding an artifact she doesn't have, he drags her into a world where telekinesis and empaths-someone who can sense the emotions of others- are the norm. Now someone wants her dead, and her only hope of survival is an assassin who's every bit as dangerous to her body as he is to her heart.

I did not enjoy this book as much as I did the author's other work, but still a great story.
This book is mostly full of suspense, with smut and romance thrown in.
I was not fully captured by the story, only some parts were captivating.
The story was very well written.
Because the story is written about an ancient warrior group, the modern day warriors still use some of the old language. Ms Burns includes such words in the story, if you don't know them you have to figure them out with context.