Erica's Review: The Ouija Board by Shelby White 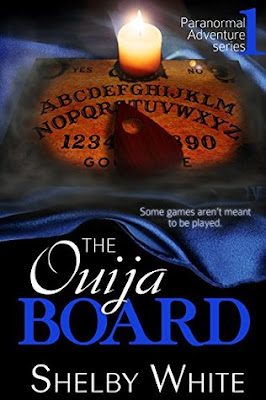 When Alycia and her three best friends bought a Ouija board for some late night entertainment, they came in contact with something that defies all reason. They find themselves faced with questions that would make others run in fear. Delving into this frightening unknown, they soon discover they are dealing with a force more powerful than they could possibly understand.

Enlisting some knowledgeable help on supernatural entities, they are introduced to a world they never thought existed. As they try to maintain the normalcy of their summer break and figure out how to rid themselves of this other worldly being they realize their lives will never be the same and that some games aren’t meant to be played with. 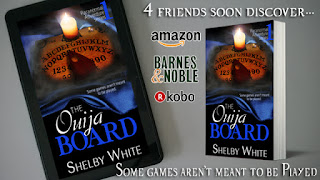 
I liked how the author wrote this book, how she included the paranormal activity. I liked how she had info on how ghost could still be on this plain.
I enjoyed how throughout the book it continued to grab your attention, always with something new
OMG, the end was great. Grabs you! Hoping there is a second book. I was so wrapped up in the story I didn't realize how fast I read this.
This does have a cliffhanger.


*I was given a copy in exchange for an honest review.

Shelby White was born and raised in Northern California. At a very young age she fell in love with the arts and began writing short stories for fun in her spare time anywhere she could. As time went on she found her passion in Television and Film and the art of storytelling. She was fascinated with the stories, the lives that characters lead and the way that each story could be told. She soon found a way to combine her interests in high school writing film reviews for her local newspaper. This love of writing and expression through TV, Film and eventually in college working behind the scenes in theatre led her to pursue a Bachelors of Arts in Communications with a minor in Film Studies from the University of California, Davis. Shelby currently resides in Northern California where she continues to write and pursue the creative world around her.

Shelby’s first novel, “The Ouija Board is a YA Paranormal Mystery following Alycia and her 3 best friends who come across a Ouija Board and stumbled onto something that would alter their perception of their. That summer their lives change forever and they learn quickly that some games just aren’t meant to be played with.

Email ThisBlogThis!Share to TwitterShare to FacebookShare to Pinterest
Labels: Erica, Paranormal, review, YA