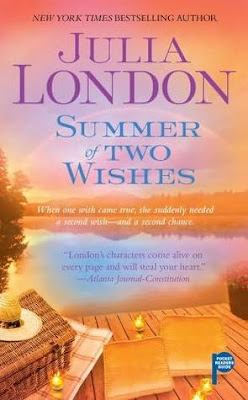 WHOSE WIFE WAS SHE?

Macy Lockhart's life shattered in a moment with the news that her husband Finn --- serving in the military overseas --- has been killed in the line of duty. Their ardent and devoted marriage is over, leaving Macy alone, empty, directionless. But while she tries to sustain herself with memories of Finn, the strong, quiet man who made her and their small Texas ranch the center of his life, it is wealthy Wyatt Clark who slowly brings joy back into her life. Her love for Wyatt may be less romantic than the breathless passion she'd once shared with Finn, but the time seems right to move on, and their marriage is happy and as solid as a rock in troubled waters. Until the day that Finn, miraculously spared from death, returns home to claim his bride

Wow!
This book was an emotional rollercoaster (for the characters).  So many ups and downs, and hard decisions to make.  I have no clue how I would have handled Macy's situation, that is one tough call.
I loved Macy & Finn, I didn't care for Wyatt at all (not even any where in the book).  Wyatt was a total jerk, yes I understand it was a rough time.  But he was never understanding or "there" for Macy.  But he claimed to care for her so much, he had no sympathy for her.
Macy & Finn, had true love.  A love that last, that makes you still want each other no matter what.  Macy & Wyatt had what I call a material love.  He was there for her (years ago) when she was down.  Then to keep her by his side, he would buy her gifts.  In my opinion to make her forget Finn and love him.  That is not a lasting relationship.
I had a hard time putting this book down, I was very captured by the story.
Posted by Unknown at 9:48 AM